From The Cutting Room Floor
< Super Mario World (SNES)
Jump to navigation Jump to search
This page contains changes which are not marked for translation.
Other languages:
English • ‎français • ‎polski • ‎português do Brasil • ‎한국어

This is a sub-page of Super Mario World (SNES).

The game's logo was redrawn for the international release. The Japanese logo is very similar to that of Super Mario Bros. 3, featuring much larger shadows and smaller Os than the international version. The international release also replaced the unique trademark symbol with standard blue letters. The wooden border was given more detail, and the copyright information was updated as well. Since the European Rev 1 release displays all 239 scanlines, the border was extended vertically. Interestingly, this returns the height of the European title screen border to that of the 1989 build.

In addition to these changes, the intro screen upon starting a new game dissolves automatically in the Japanese version after the jingle has ended. In other versions, the player can let the text box remain on screen until a button is pressed. This also applies to the text in the Switch Palaces.

Some of the letters of the file select font were redrawn for the international versions. This applies to the letters A and B, and the numbers 1 and 2. 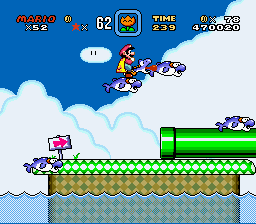 In the Japanese version, it is possible for Yoshi to eat the dolphins used as platforms. The US and European versions of the game both edit the dolphins' code so that Yoshi cannot eat them.

This change was (likely unintentionally) undone for all versions of the Game Boy Advance port.

In addition to the standard translation of Yoshi's name, the international version also adds some shading to the sign.

More localization changes to the graphics.

And again. The lights to the side were also spread further apart to squeeze in the new name.

Oddly enough, two of Princess Peach's sprites look less polished in the international version — one that is used when she walks over to Mario after defeating Bowser (though not when she arrives at Yoshi's house after the credits) and one used when she kisses Mario.

A few changes were made to the original version's levels to make the game easier. The GBA port retains these changes for all versions.

An extra Yellow exclamation block was added to the beginning of the stage.

The walls at the end of the two main rooms were extended a bit to fill the whole screen. 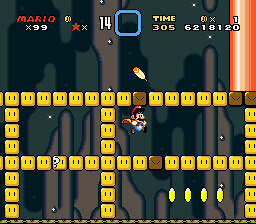 This turn block with a feather in it is a normal turn block in the Japanese release.

The time limit was changed from 300 seconds to 400 seconds in the international versions.

The secret exit for Chocolate Island 3 (required to move forward in the game) was made a bit more obvious by adding two more arrow signs. 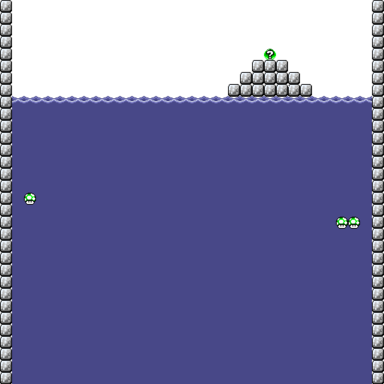 The three 1-up mushrooms at the bottom of the Ghost Ship are not present in the Japanese version.

Engrish in the Japanese version was fixed for the International release. This change moves the words "YOU ARE" further to the left as a result.

In the Japanese version, every two levels have the same name, instead of using 1980s slang words.

The digits in the Japanese version's level names use the same graphics as the lives counter. In the international versions, the numbers are part of the font.

Four levels in the Japanese version have extraneous numbers that were removed from other versions of the game:

The credits has a number of title changes:

The enemy cast list in the Japanese version does not have different names for the post-Funky enemies. This was a feature added to the International versions.

The enemy cast list was updated with new names for the international versions.

The version of Super Mario World released for the Nintendo Super System got some minor tweaks to fit better as an arcade game. 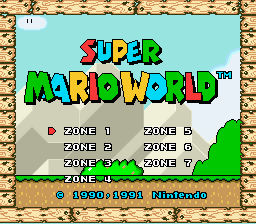 In the ROM released on Wii Virtual Console (and all subsequent rereleases), three shades of blue are markedly brighter and less saturated in the global palette, making them closer to periwinkle than navy. This is likely due to the Switch Palaces--all three shades are used by the stripes on the walls, ceiling, and floors, and in the hallways at the end of the stages this texture covers most of the screen. The lighter colors are most likely an attempt to minimize the risk of seizures should the player enter this area running.

Retrieved from "https://tcrf.net/index.php?title=Super_Mario_World_(SNES)/Version_Differences&oldid=851688"
Categories:
Cleanup > To do
Subpages