The King of Fighters: Heat of Battle

The King of Fighters: Heat of Battle is a Game Boy port of the Neo Geo fighting game. Guest starring early appearances of Orochi Iori, Orochi Leona and a surprise guest appearance from Mr Karate! 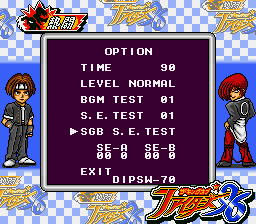 This game shares mostly the same engine with King of Fighters '95, the same "DIP SW" flags are accessible here also. All coding and behaviours are mostly the same except some different effects are described in the table below. To set any of these flags, at the TAKARA logo enter a particular button combination from the table below to get a corresponding effect. Every time one of the flags are set, the corresponding sound will be heard. As against the previous game in series, this one allows to activate all cheats in any GB mode. To see what DIP switches are enabled, go to the options screen. At the bottom of the screen there will be string "DIPSW-XX", where XX is a hexadecimal sum of all enabled DIP switch bits.

Note, that because of how specific the code input and check method is, all button presses are counted at the same time, so if you enter one of the codes, you are already entering all the others. So if you just quickly press Select at least 20 times at least two codes will be enabled at once. To unlock all flags at once, first, hold A + B, press Select once, while still holding those buttons, hold additionally Left, then press Select very quickly 30 times. When you hear a final explosion sound that means all codes are activated.

When the DIP Switches cheat for unlocking Mr. Karate is used the SGB border is changed for all versions of this game. While the Japanese version changes the border palette to be much more darker, the European version does the same but with a rather pinkish palette.