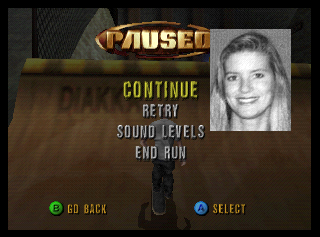 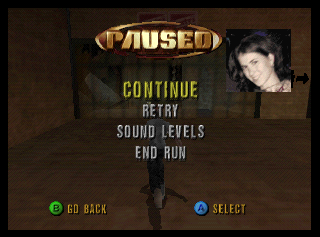 Pause the game, hold L and press Down on the D-Pad, C Left, C Up. A picture of a second woman appears, this time in color. Both pictures only get cleared upon returning to the main menu or changing levels. They will overwrite one another.

The game was released as Tony Hawk's Skateboarding in Europe because the word "skater" could be confused with an ice skater. Oddly enough, this change made it in the later North American revision.

When you save a career with a certain name, several strange things happen. After entering the name, the sound when performing a special trick will play, all in-game messages will change to the nonsensical string which will differ depending on which name was entered, and the game will freeze sometimes. There's a total of 2,170 names that will activate this which can be seen on the notes page. Whether this is a bug or an unfinished/broken feature is currently unknown.