We've decided to let the bob handle line breaks now, since someone was kind enough to fix the stretching issue. I realize it doesn't look as nice with some titles, but with manual line breaks, you run the risk of breaking things at non-default text sizes. I prefer the wiki to be able to adapt to various text and screen sizes (mostly) automatically. --BMF54123 16:50, 3 August 2013 (EDT)

Hey dude. Thanks for editing the Pac & Pal page to not have the easter egg image not get in the way of the revisional differences heading.

Did you create this image by reactivating unused code in the game, or did you manually overlay the sprite animation? If you added the sprites in an image editor, then the tag should be changed to {{mockup|NES}}. --Grandta13 (talk) 09:39, 20 July 2015 (EDT)

I noticed you removed the statement that player 2 had no name when player 1 was controlled by a computer in Perfect Fit with the statement 'it's clearly has a name and use it' . It may be more accurate to say that player two has a blank name. (I did forget to re-add that the Player 1 name defaults to LI'L BIT; thanks for that). I wanted to make sure there wasn't some other reason that you removed the player 2 info before re-adding it. This is a screenshot showing what player 2's screen looks like when 2 computers are playing against each other. --Grandta13 (talk) 08:24, 22 July 2015 (EDT)

How did you get FamicomBox screenshots? I tried running the BIOS in MAME, but I couldn't get anything to display, apart from

I emulated it in FCEUmm/FCEUX, you just need to assemble a UNIF file with board name "SSS-NROM-256". But actually it's unfinished, and you couldn't play something, better to run it in mess if they add its support someday.--Cah4e3 (talk) 12:52, 22 July 2015 (EDT)

While I can understand that it tends to push down content, it's largely done intentionally such that pictures in these sections aren't pushed down right below the bob. In fact, forcing __TOC__ and {{clear}} into the page helps line up inline images with the section they belong to. --From: divingkataetheweirdo (talk) 13:49, 4 February 2016 (EST)

as I see, TOC does nothing, if there are more than three sections in the article, "TOC" will be added automatically. "clear" mostly does a large gap between the top of the page and below the bob. most of pages are ok with no toc and clear at the beginning.--Cah4e3 (talk) 14:39, 4 February 2016 (EST)

Thank you for your rewrite this article! and Sorry my explain is not enough... but this is not glitch. When press Reset in this game, always switch CHR pages. but I don't know emulator that can hold Reset.--athena/ユウリ マヤ (talk) 23:54, 25 September 2017 (EDT)

pressing reset can't do anything except resetting all CPU and PCB signals to default state. the reset state of circuits can't be predicted, as well as the power-on state of the RAM. this is a glitch. As you can see on the video I found on youtube easily, they reset the game twice, before getting the right result. there is no any emulator that can simulate this behavior. it's random. it's because of state of pins at the moment of the reset signal. it is possible, that mr.tobita added it's initials in place of Hudson tiles in sprites page, maybe he noticed some static behavior while he reset the game... but I know for sure, it's impossible to predict and program this behavior on purpose. only by luck. --Cah4e3 (talk) 15:08, 26 September 2017 (EDT)

NES and some machines can be do anything after press reset. In NES, When press Reset-button, CPU access to reset vector. and jump it. Reset does not change RAM values. Therefore, some NES games can hold high-score over reset, Nekketsu Koukou Dodgeball Bu play voice clip when press reset-button.--athena/ユウリ マヤ (talk) 18:56, 26 September 2017 (EDT)
and In 4 Nin Uchi Marjong, When press Reset, Initialize PPU registers. so Change CHR pages at this time.--athena/ユウリ マヤ (talk) 19:23, 26 September 2017 (EDT)
I tried it on real console and emulators. Real console is display credit every time while hold Reset-button. This don't need press Reset-button more than once. Emulators(Nestopia, VirtuaNES: There is a screenshot below.) display credit 1 frame when use soft reset. but emulators doesn't has function of holding Reset-button, so can't continue to display. and I apologize for writing it four times in a row.--athena/ユウリ マヤ (talk) 08:11, 27 September 2017 (EDT) 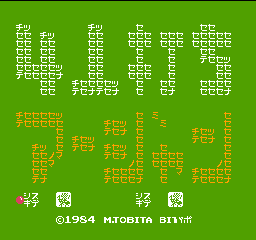 But why not? The way it was, it was a nice comparison to look at and a good tidbit at the end of the page. Since it was at the end, it does no harm. The way it is now, the phrasing in the very first sentence is odd and the reader, who has most likely never heard of the game Miracle Ropit before might be interested in knowing what it looks like.

The TCRF wiki does focus on version differences and therefore on comparing between different versions of games. Why should it not also compare between two different but connected games?

I have also silently added Miscellaneous sections on few other pages, such as on Super Mario Land 2. Again, I do not see why it is of any harm to have such a small section at the end of a page. I hope you understand. What is your stance on this? --Mugg1991 (talk) 16:21, 8 September 2018 (EDT)

TCRF focus on differences only if there are no other things to do lol there are no differences and for sure not cover differences between similar games on different consoles. this info is ok for intro section, nothing more useful there. also your images are garbage as well.--Cah4e3 (talk) 08:11, 9 September 2018 (EDT)

Thanks for posting this info about the Animal Crossing ROMs here. If you could document this stuff on the game pages, I'd appreciate it. --Hiccup (talk) 11:20, 22 February 2019 (EST)

Thanks. I'll probably still be adding the binary differences to the other games to their note page, for reference. --Hiccup (talk) 14:30, 22 February 2019 (EST)

The edits on Color Dreams games

Hello there! I'm not too keen on using talk pages so I hope I'm doing this right. Just wanted to talk really quickly about your removal of some of my Color Dreams KungFu engine things, and well... I still think it's something that should be documented in here(Because it really does feel like some sort of development leftover, seeing as its got an activation as simple as changing a number, but can only be done before the game is started) buuuuut I'm a big idiot, so you're probably right on removing these things. Good on you on that! I'm really not smart enough to argue with you about it; it really is something I found by accident and decided to document, but if you care enough explain, I'd love to know why exactly this is a RAM glitch caused by me screwing up, than anything leftover. Well, anyway, I just think that Room 17 of Menace Beach should have been kept, as its actually an unused room in the game and not an inventory change like the other thing I documented. It is just like Room 0B in Operation Secret Storm and Challenge of the Dragon, which you didn't remove; so I guess you agree with me on them being actually unused things instead of glitches? --Welfz the Wolfaroo! (talk) 14:16, 2 March 2019 (EST)

ok, first things first. feeling that "something must be the development leftover" not equals knowing it for sure. simplicity of activation is not an evidence. in any game you may damage one random byte and get some "special" effect causing by the damage. this is just a coincidence. Next, I'm not the first person who discarded your "debug leftovers". see https://tcrf.net/index.php?title=Menace_Beach&type=revision&diff=636099&oldid=585555 the commit comment mostly self-explanatory and may be threaten as explanation you asked about. so we have two people opinions who actually skilled in disassembly and debugging of the NES code against one person who just feel he found something. you may not trust me personally, but I checked this game as well (BMF did it for sure before discarding your first commit) and I see you just did the simple corruption thingy that causes a LOT of unintended data loading due to complete skip of proper initialization (BMF told you so also). about stage 17 in menace beach maybe I misunderstand something in the first place, and I see it's resources not used, but this may be just a well hidden bonus room, need to investigate more. when you do this, feel free to restore it back. also I need to ask you to describe your "method of accessing" things more specifically. "opening a hex editor" and "changing a first set" not a valid description at all. when you need to open hex editor? this does not work any time, this work only at specific point of the code. what does "first set" is mean? first set of what? there are RAM addresses, please call it "RAM Address $XXXX" or something. especially if you asked (todo) other people how to access it via game genie code...--Cah4e3 (talk) 10:37, 3 March 2019 (EST)

Alright, thanks dude!! Sorry for the headache, I wasn't too sure of what I was doing and I really don't have any programming knowledge for old games like this, but thought it should be documented, even without being able to confirm the stuff. Also, sorry for replying 6 months later, heh, but I really do appreaciate it! Thank ya' --Welfz the Wolfaroo! (talk) 22:19, 29 September 2019 (EDT)

Heyo. Been following you for a long time and just want to say thank you for all your hard work discovering cheats. I always like to see credits screens to see the names of the developers. Keep up the great work! --Doommaster1994 (talk) 10:22, 23 March 2020 (UTC)

in eighter way, game does not contain this code anymore and it can't be threaten as "unused" content. anyway, if maintainers of the wiki disagree with that, feel free to recover.--Cah4e3 (talk)

Are you the person who wrote the article about Batman Returns (NES) copy protection? I'm looking for more information, in order to make a romhack that would deactive it. I have found the ram address where it says whether or not the conversation was recorded in stage 3-1 ($0107). I have also found the ram address that tells the state of the level (whether or not the windows are opened, $0119); but I find no trace of the copy protection code anywhere.

I have tried to delete all the references to "Konami" in the game, both in the CHR and PRG; yet I have failed to trigger the copy protection. I do however remember the copy protection messing with the game when I emulated it in Nesticle as a kid (whether that was due to the emu or a bad rom, I can't say).

Do you happen to remember more, have any notes? thank you

Wow, this is absolutely amazing, a lot more than I expected. Thanks a lot!