The Wii's YouTube channel allowed you to stream YouTube videos directly to your TV, especially useful if you didn't want to use a computer or didn't have one.

The service was discontinued on June 28, 2017 in favor of the HTML5 players that were being used by newer systems.

Present in the application's files are some development-related settings, including non-working URLs for different variants of it. 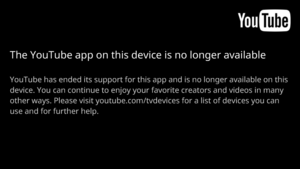 The screen, ripped directly from the SWF file.

While this screen isn't stored anywhere in the application's files, accessing the URL https://www.youtube.com/wiitv (normally used by the application) will bring up a screen (in an SWF format) that notifies the user that YouTube is no longer supported for their console. This screen is unused because if you were to try to access the application normally, you would just get the standard Nintendo Wi-Fi Connection discontinuation message and as a result will not be able to see this screen.