The second entry in the Super Robot Taisen series, this game introduced the Divine Crusaders and the concept of pilots. 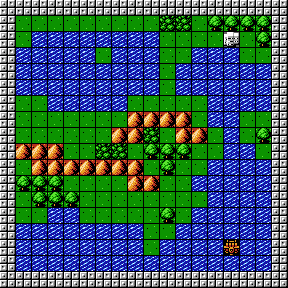 Use the cheat code 7411:1A, and then start a new game or continue from an intermission to enter this map. There are no player units here, and no victory or loss conditions either, just a pilot-less Medea that never moves. The scenario script for this stage is empty; it is unknown if this used to be a debug map.

Even though this is the last valid map, further spawn tables also exist in the ROM, starting at 0x7CB6. The first 3 tables also spawn exactly one unit at the same position, except that unit becomes a Getter 2 (ID 03), Granzon (ID 5D), or Dreissen (ID 47) respectively; the last 2 tables are completely empty. Note that this Granzon is an identical, unused clone of the one used in Scenario 20 and 26 (ID 5E).

In this game, the amount of EXP required at each level-up depends on the pilot's current level, rather than being fixed to 500 like most Super Robot Taisen games. There are in fact 4 different EXP curves present in the game, but all pilots use only the first one, and two of the curves are duplicates, which leaves the following curve at 0xB7D3 unused:

Likewise, there are different growth curves used to calculate level-up increments for the HP, Power, Defense, and Speed of every robot, as well as the SP of every pilot. At least two such curves are unused, at around 0xB918:

This game is one of the first among the series to reduce hit rates as the distance between the attacker and the defender increases, even before Alpha. Each weapon can in fact use one of several distance penalty tables; melee weapons and Funnel-like weapons have no penalties, whereas other ranged weapons all share the same penalty table. It turns out that there is an additional, unused penalty table located at 0xB737, followed by two duplicates of the no-penalty table:

The table values are multiplicative; for example, a hit rate of 80% for two units located 6 spaces apart would become 60% with the used table, or 48% with the unused one. In both cases, the penalty values for distances from 10 to 15 are also unused, as no weapons ever exceed an attack range of 9 spaces. 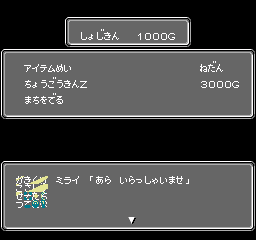 A total of 8 item lists for shops are defined at 0x15752, but only the first 5 of them are used, and 2 are duplicates with slightly different messages used when Bright Noa visits the shop of Scenario 2 / 5. The remaining 3 unused lists, all identical, contain Super Alloy Z as the only item and use a corrupted character image. The Game Genie code SNKOOAEY replaces the shop list on Scenario 2 with the unused list; visit the building near the start location with any unit other than White Base to reveal this shop list. 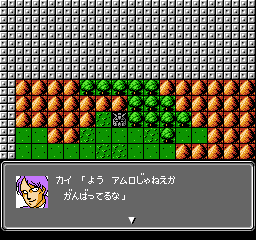 When a unit moves into a particular space, it may trigger one of several actions depending on an event ID associated with that space. The same mechanism is used for the shop lists, and apart from unused shop lists, 2 other event IDs are also unused. The following are all the valid IDs:

Mobile Armor form of the PMX-000 Messala, which always appears as an MS in-game.

MSN-00100 Hyaku-Shiki from Mobile Suit Z Gundam. Two identical clones are present, both without any weapons assigned; one of those clones would supposedly have stronger weapons than the other clone if the weapons were present (similar to how the game upgrades other robots). Hyaku-Shiki's iconic weapon, the Mega Bazooka Launcher, is also among the unused weapons (see below).

MSN-02 Zeong from Mobile Suit Gundam. The second weapon is unique to this unit, so it also goes unused. Like the Gilgilgan, when this robot is destroyed it automatically transforms into...

Zeong Head. Both forms became a reality in the next game. Based on the location of the unit icon, the Zeong could be spawned during Scenarios 16 to 19.

MSN-04 Sazabi from Mobile Suit Gundam: Char's Counterattack. The Funnels are unique. Notice that Sazabi is an enemy unit (with right-facing sprite) while the Hyaku-Shiki is playable; the Char's Counterattack arc never happened for the entirety of the classical Super Robot Taisen timeline. In this game Char just kinda disappears after the first few stages.

Zuu from Getter Robo. An underwater Mechasaurus which uses Flame and Tail Whip. Its icon looks extremely like the Mechasaurus Dai but they are different (this one has a round eye on the upper head whereas Dai has a pointed one). It may be spawned in Scenarios 1 - 3 and 10 - 12.

G Armor from Mobile Suit Gundam, formed by combining the G Parts into the RX-78-2 Gundam. This would presumably be obtainable via the unused G Parts. Neither Gundam nor G Armor is marked transformable in the game data. (As with all transformable mobile suits in the game, G Armor shares the same map icon as the untransformed counterpart.)

"Normandia". Absolutely nothing is known about the origins of this robot, as it never appears in any other Super Robot Taisen game. Its weapons are Smash and a stronger (otherwise unused) variant of Anti-Air Missile. The sprite layer was offsetted 16 units to the right, resulting in an incorrect robot sprite. The fixed version is shown below:

Some other less noteworthy unused robots are:

These weapons are not referenced from any robots at all, or only appear on unused robots.

Wire(d) Beam Cannon. Used by Zeong, and has a proper battle animation.

Sazabi's Funnels. Identical stat-wise to Quin Mantha's, but uses its own animation sprites.

Beam Tomahawk, a weapon originally on either the Dreissen or the Sazabi. Dreissens use the Beam Naginata instead in the game. The battle animation consists of a single slash effect colored in pink.

"Shadow Slasher" and Graviton Cannon, the latter of which becomes an actual weapon on Granzon in the sequel. Both weapons use the Black Hole Cluster's animation. These weapons might have been downgrades of the final ones on Granzon, indicating a possibility that the Granzon with ID 5D would show up in a slightly weaker state before the final scenario.

Two variants of "Energy Drain". It is unknown what "Energy" refers to, since EN was not yet a unit property in this game. Their battle animations are incomplete, and simply scroll past both the attacker and the defender.

The following are unused upgrades / downgrades of existing weapons:

3 pilots have full stats but are not used anywhere in the game:

Quattro Bajeena from Mobile Suit Z Gundam. His appearance was probably scrapped along with Hyaku-Shiki. He even has a sortie message.

Christina Mackenzie from Mobile Suit Gundam 0080: War in the Pocket. Strictly speaking, it debuted on this game due to the appearances of Hygogg and Z'Gok E. Her spirit commands are very lackluster compared to other Gundam pilots.

The Char's Counterattack version of Char Aznable. Those extra stats surpass that of virtually every other main Gundam antagonists like Scirocco and Haman.

The following pilots have zero SP, no spirit commands, and no extra stats. They are most likely planned to be characters that would only appear during event dialogs. (Note that certain units like ordinary soldiers also have their stats like this.)

The following map events are unreachable and never occur during gameplay. As they are never referenced by other event commands, their intended trigger conditions are unknown.

Using the given Game Genie codes will replace Scenario 1's start dialog with these unused dialogs, unless otherwise noted.

Although 24 items are present in the game, only 9 of them ended up being used. The unused items are: (English translations are based on the unofficial patch)

Some debug routines are leftover from the development stage of the game. Since that game uses some scripting language to drive most of the game's parts, the routines are assigned to currently unused script commands and intended to be called with some debug scripts too. Unfortunately, there is no longer any debug scripts left in game, so you can't run these routines properly without writing some scripts from scratch, to enable proper CHR data banks, palette and PPU setups. With the following codes you can insert some of these routines into the game's script and see how it should look like and work. Palette for these pictures, unfortunately, was altered manually after using the codes. 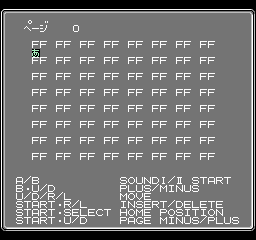 Use the Game Genie code GXKETAIA to re-enable a Sound Sample Editor. Just start a new game and follow the instructions on the screen. This editor allows you to write some PCM/DMC sample and play it. 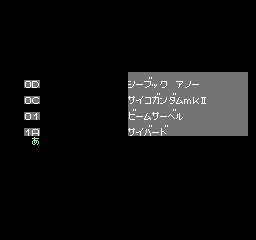 Use the Game Genie code YXKEYEAL to re-enable an incomplete combat editor. Just start a new game and use the same controls as for previous routine. This menu triggers the routine at 0x3B017, which is supposed to perform the following:

The routine however does not move the units properly, and both units still have to be selected from their existing positions until a movement is made. It also does not actually trigger a combat between the units. It is unknown how to trigger this menu properly during a scenario. 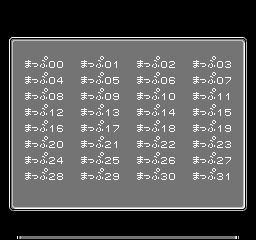 Only the tilemap from the Map Selection screen seems to be left.

Unused item-related texts at 0xFD2C. Judging from the text location and the unused item handler, it might have been planned that someone (possibly the enemy too) can plant mines on the map, whereas Boss Borot can reveal them once the unused Mine Detector is equipped.

Messages for the unused "Cyblaster" and "Omega Blaster" weapons, found at 0x18FBE.

Located at 0x3FFF0, near the end of the PRG ROM. Similar text can be found in may other games of the same developer. The number is unique to every different game. Unfortunately, not all games of that developer has that string inside, even if we know for sure the author.

This game was released as part of GBA's Famicom Mini series when Super Robot Taisen GC was released. Most graphics were squished to accommodate the GBA's smaller screen resolution. Some text strings were also changed: 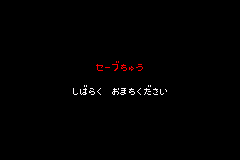