The sixth and final GBA Super Robot Taisen tactical cross-over series entry and arguably the best. It comes with amazing (for the GBA) animated attacks.

Like most of the GBA titles, Super Robot Taisen J has a debug menu. Use the CodeBreaker code 03001EC0:31, start a new game, and you'll end up in the debug menu. Disable it once you're in.

You can enter an inescapable sprite viewer, a sound test, and you can start any mission with all mechas available with 9999999 G. 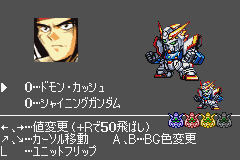 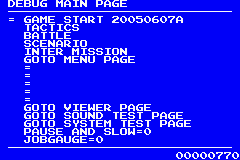 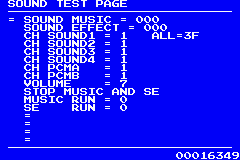 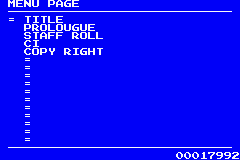 You can also test any move for any mecha, although setting two bosses or using the opponent "Nothing" may cause the game to hang. This way, it is revealed Justice Gundam has an unused self-destruct attack. Animations for said attack were used instead for Destroy Genesis.