The fourth Super Robot Taisen game for the GBA, popular in Japan for its unusually dark setting and plot but considered the black sheep of the series by the Western fanbase because of its unusually high difficulty level. Unlike the two GBA Original Generation games, it eluded, once again, localization.

Like most of the GBA titles, Super Robot Taisen D has a debug menu. Use the CodeBreaker code 03001330:31 at the main menu of the game, start a new game, and you'll end up in the debug menu. Disable it once you're in. Unlike in the other games' debug menus, all options are functional here. They include a save file test, a sound test, and some test areas. 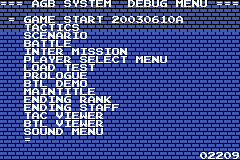 The following unused robots can be found via the debug menu. Both of them have more or less complete stats but incorrect sprites.