Earthworm Jim 3D is the third (get it?) entry in the series and is notorious for being lackluster. Help Jim as he tries to save his mind!

Found in the Windows version's files is a font named Funhouse, the font used by the game. Despite this, removing the file doesn't seem to have any effect.

In the Windows version, Track_13 is duplicated as Track_14 in the game files. 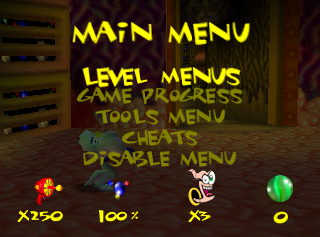 The below GameShark code will replace the in-game pause menu with a debug menu that allows for various debugging features and cheats to be toggled.

The same pointer to replace the menu is located at 859C0 in the ROM.

You may need to reset the emulator/console in order to make it work. It is similar to debug menus found in Tom and Jerry in Fists of Furry and The Powerpuff Girls: Chemical X-Traction.

Alternately, you can apply the below code then when at the "Press Start Button" screen, press C-Up, C-Right, C-Down, C-Left, C-Up to enable debug mode which replaces the pause menu with the debug menu.

A standard level select. This one appears to be broken, however, as there's only one option: the hub world.

View the progress of the currently-active file.

The text for the debug menu, as well as some status and error messages, can be found at C4090 in the ROM.

Each map has a short and long variant of its name, for example "Boogie Nights" is the short version for "Boogie Nights of the Living Dead". There is an unused copy of the Poultrygeist Too names (the real names referenced by the game are stored elsewhere) which states that the long version of "Poultrygeist Too" is "Poultrygeist II: They're Back", which is stored at 0x800C1B9C in RAM.

There is some unused text relating to the intelligence system used to unlock levels.

Indication of a Fifth Hub

In the game's memory, there's some text relating to Objects in certain categories.

Normally at run-time, a call is made to function 0x80026858 which disables all debug cheats. However, at 0x80026820 is a routine that enables all of the debug cheats at run-time. This enables the debug cheats: Health, Lives, Ammo and Guns. It also activates two other things, however it's not clear what they are or if the game even uses them anymore. Apply the below code to re-enable this call at run-time to activate the cheats. 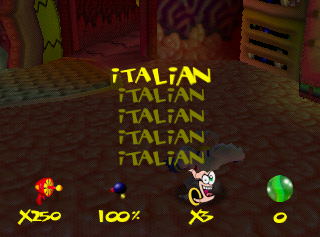 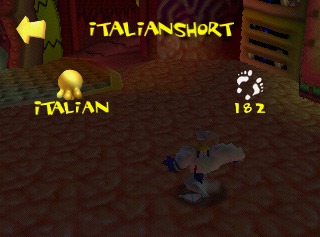 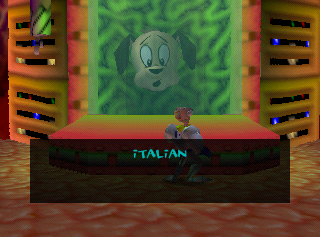 The US version only runs in English, but using GameShark code 800D2795 000? (where "?" is one of the below) to force the game to use a different language reveals that the game has placeholder text for the other languages.

Notably, the Jibber-Jabber "language" only accessible in the European version is present and fully functional in the US game as well. 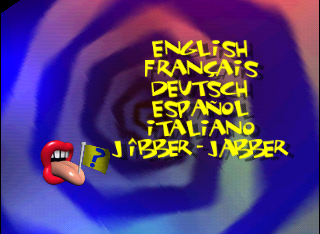 In addition to the European version containing options to display the text in French, German, Spanish, and Italian, it also contains an option for a "language" called Jibber-Jabber, which seems to be an intentionally-bad English translation.

The game was released on PC 7 months after its N64 release, with some minor tweaks to get the game to run on PC. It also shares various differences.

The game's title screen is different on PC, it added some options to the menu. However the PC version removed the in-game demos.

The PC version's sprites are pretty much cleaned up and some are changed, the textures are also in a higher resolution and are more detailed.

The PC version's music are in much higher quality than the N64 version. And some tracks in the PC version are very different.

The PC version has a different intro, and is much shorter than the N64 Version.

On PC, quitting the game via the "I want to end it all" option while paused will close out the game. While the N64 version just resets the game.