F-Zero AX is the arcade counterpart to the GameCube game F-Zero GX.

The venue background for Green Plant is a snapshot of Spiral rather than Intersection since only the former is playable.

F-Zero AX has leftover information about scrapped and altered venues that do not appear in GX.

An extra file called bmp_stg_aur exists in the ROM directories \bmp\stg and \bmp_e\stg, folders containing Course Select venue backdrop graphics. Every venue in the game uses a 3 character shorthand. "aur" is the shortened development name of an unused venue, which does not correspond to any venue seen in AX or GX.

Unfortunately, the image is a "DUMMY" placeholder (also present in the Japanese GX), leaving no insight into what "aur" stands for.

Fire Field was once rudimentarily called "FIRE". This could possibly imply that it was to be its own entirely different lava-based venue, but nevertheless stuck with the fabled Fire Field name.

"This Elevator is bound for Zero Station"

The Phantom Road venue debuted as the next iteration of Rainbow Road [Psychedelic Experience] established in F-Zero X.

The intro graphic for the then Rainbow Road venue.

The Screw Drive track may have once hosted in Sand Ocean as opposed to Aeropolis seen in the official release. Stage 00 is also present in GX, albeit without any proper texturing. To the contrary, the AX version is quite complete, missing only minor graphical elements such as lane dividers, Sand Ocean-appropriate track textures, Sand Ocean-styled guardrails, the newer heal pit, and background audio.

This is the final prerelease version of Mute City [Twist Road]. The only aspect that is different is the track texture. The GX version uses the same track texture as Sonic Oval which, given how long this older texture has been used throughout various promotions, it was a last-minute decision to use the com (Sonic Oval) track texture instead.

This earlier design hosts almost twice as many mines as the final release, all in the last stretch of the track.

The AX version of Green Plant [Mobius Ring] dons the notable increase in mines, especially the 2 after the starting gate. A few more have been added in after the first healing pit, particularly in the center where none took place in GX.

There are 3 differences on this stage, the first being the drastic addition of 27 monitors behind the turbine fans (3 sets of 3, 3 times). The monitors also used in Aero Dive glow blue with red dashes running across it. During the first section of the pipe, GX had 2 zippers in quick succession of the other, though the AX version does not have that. The last addition is a much brighter filter exiting the tunnels. Amusement Vision added an opaque-to-translucide block that, while leaving the tunnel, gives off the appearance of someone going outside after a long time indoors. The effect remains in GX, but is not as strong. The intro animation, complete though cut short due to the shorter sequences of AX shorter sequences, is also different.

The older Big Blue venue had more atmospheric qualities, most notably sun blindness which could occur at certain key points in the course while facing the sun, sometimes causing half the screen to go white. This was most likely removed due to the increased difficulty and the inherent randomness of it all. Tunnels also have darker cast shadows which pass the track horizontally. The AX Drift Highway, while mostly the same, has more puddles of water near the starting gate.

The environment assets on this stage are placed differently. Right out of the gate, you can see a spectator tube above the stage, with some other objects bound to be in different positions. Another aspect quite noticeable is the intensity of the flames: they're much brighter and seem to be more numerous. The color of the small vertical pipes on the final stretch of the course are also grey rather than blue-violet.

For starters, Vegas Palace's (Casino Palace's) track texture is very reflective. This may be due to the fact that its atmosphere is incomplete: the venue is rather bright compared to the GX version. Split Oval itself does differ greatly from its GameCube counterpart as it is overly simplified, using only 3 boost pads between the starting gate and healing pit, with the right side split hosting only 2 centered boost pads, and only the left hand zipper around the curve. The boost areas were later re-mapped to emphasize speed and added the much needed variety the old design lacked. Sparse is more than adequate to describe this layout.

This iteration of Undulation is absent of jump pads but has identical topography to its GX counterpart. The spurts of fire are also brighter, and there seems to be a few more than the GameCube version.

This version of Trident boasts extra safety rails along 2 of the merging paths, lessening the chance of falling off while changing route.

Big Blue's sun blindness is rampant in Ordeal: the sun shines in the player's face during jumps 3, 4 and 5, significantly increasing the difficulty of both cornering and landing. Other differences in Ordeal include a block jump just beneath the hotel which, without boost, will land you on top of a passage way, a waterfall cascading onto the course, slightly hiding the heal track, and the final wrapping curve upwards does not sport any type of rail whatsoever.

As a venue, Rainbow Road had brighter and much more saturated colours, along with different, faster background animations. So much so, it may have been the cause of it becoming "Phantom Road". The quickness and flashiness of the whole thing is rather jarring and may have been toned down to prevent the possibility of seizures. As a result, the darkness and lack of vividness of the new design most likely made Amusement Vision opt to go with the "Phantom Road" moniker.

Older versions of Vegas Palace (Casino Palace) used a red/blue GameCube logo precisely like the one in Sonic Oval, however GX used an all blue variant to blend into the background more. Double Branches is ultimately incomplete, lacking jump pads, numerous zippers, a starting gate, and a ton of environment objects. It also has a small, glitched strip of rail improperly textured, though the collision data and geometry is full fleshed out.

Story 3 uses a red checkered texture instead of green in the GameCube release, though the track design is otherwise exactly the same. This crimson stage managed to sneak its way into GX as the backdrop for Story 3, which depicts the course with the red texture.

Most of the buildings use placeholder textures while others are moderately modelled and the air is relatively bright compared to GX. The cutscene for this chapter uses the same textures used here.

In lieu of being static, the blue lights circled the blast doors. It was most likely made inanimate to conserve memory for the currently absent flame and smoke effects, especially since the player can't even see the animation due to the shear speed expected to finish the mission.

The placement of a variety of buildings are different, with many of them missing. Some of them either have different textures or, as a result of a lack of atmospheric effects, look different. Some of the structures pass onto the track but have no collision data. There's also one ever-so-oddly placed zipper inside the gravel area.

Would you believe that Amusement Vision had planned to make Story 7 even harder? Believe it or not, this version fails to top off the insanity of the test version. This meditated cruelty includes additional mines, some of which are placed on the slip-zone, 8 "thoughtfully" placed mines on the ramp after the lava patches, and a shorter, sleeker recharge strip with a zipper at the end. Unlike the test map, this design features the mines behind the starting gate to aid the players boost to the end - or burst in flames, whichever comes first.

Story 8 - Secrets of the Champion Belt

This stage is identical in collision to the test stage, using the same mine layout, however the air is devoid of the heated redness that fill the recesses of the chamber in GX.

There exists 19 Staff Ghosts despite only 6 being used. They appear to exist for testing purposes and it is unclear if they used AX's control scheme and drifting mechanics or GX's. The name tagged in each file is either TOKKY for unused data or 開発者 (which means developer) for those that are used, encoded in Shift-JIS. The file size is also dependent on the factor. F-Zero GX's ghost data is 16KB, as opposed to the 12KB and 8KB formats seen here. The Cylinder Wave ghost is the only ghost which AX and GX share, and thus the only 12KB ghost data used in GX. AX's Thunder Road ghost clocks in 3.901 seconds faster at 3'14"371 versus GX's 3'18"272, being the only official ghost faster in AX as compared to GX. 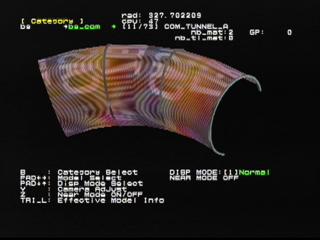 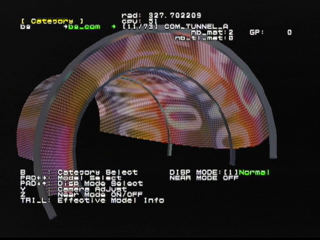 COM is the code name for Mute City Sonic Oval's venue. The model in question appears right before entering the finish line same as the tunnel portion in Story Mode Mission 1. 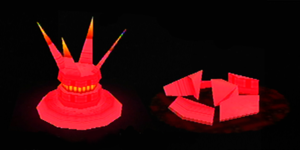 The mine model on the left with the broken mine to the right.

The mine model has sharp spikes overtop of it. 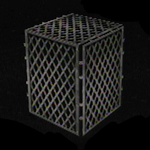 This very strange model appears different depending on where it is viewed from (front or back). Using both sides to decipher it, it would seem that it says "Hit Playback then Freeze [?]e". The before last letter is anyone's guess, though "Me" is plausible. tag2path7 is found inside test stage 86. 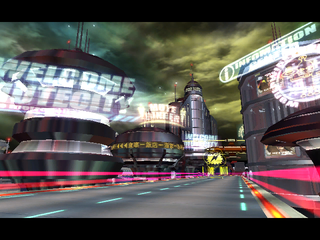 Since Sonic Oval calls the com backdrop rather than Mute City's mut, this venue backdrop goes unused. The AX screenshot uses the older track texture seen in almost all promotional videos and the Japanese sign graphics. This image is also present in the Mario Kart: Double Dash!! Bonus Disc and the Japanese GX, though it was updated for the subsequent US and PAL releases due to the localization team changing the sign graphics.

This early hotel sign found on some of the pod houses in Mute City can be seen in backdrop image just above is present in both AX and the Japanese version of GX.

Below is the final version found in Sonic Oval's archive. Mute City's was left outdated as it posed no harm to what is normally playable.

The lava texture in AX is more metallic and less like lava, which is probably why it was scrapped. Lava-like hazards in Maximum Velocity used an animated circular pattern, which may be where AX's lava texture came from.

This early lava texture can be actually seen in-game in AX when accessing its early version of GX's Story 7 (not the test version). However, the lava fails to act like actual lava, unlike the pit lanes and dash arrows, which despite sporting different designs function as they should.

While a bunch of the venues are stilled blanked out, we can see the development names for both Cosmo Terminal (Elevator) and Phantom Road (Rainbow Road). Oddly, Mute City went on to use the icon which depicts Sonic Oval, while Sonic Oval used a variant of itself (the one with "CASINO" written across.)

Grand Prix Interview
An earlier version of the theme heard after winning a Grand Prix.

Big Blue (Story 4)
An early version of Big Blue used in Story Mode's Mission 4, "Challenge of the Bloody Chain". It was used in an early promotional video present on the The Legend of Zelda: Ocarina of Time Master Quest disc.

A completely blanked-out file in the motion directory of the ROM, sitting with all of the game's character rigging and animation files. It was presumably used in testing the game's animation sequences, or simply forgotten about when reworking the Super Monkey Ball 2 engine.