A Genesis entry in the Gauntlet series that includes a new Quest Mode which adds RPG elements to the basic gameplay, while also including a full port of the original arcade game. It was the first game developed by the group that would become M2, started as a fan port of the original for the Sharp X68000, before Tengen picked it up and made it a sequel. 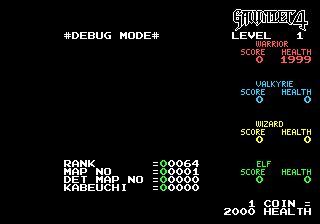 To access the menu, enter one of the following codes and pause the game.

The change to MAP NO takes effect after using an Exit tile.

The Japanese version of the game is called simply Gauntlet. It includes both Japanese and English language modes, set by the console region. The international versions also include a Japanese mode, but are region locked to prevent them running on Japanese consoles, short of Game Genie codes (AX7A-CA7C for AUG 1993, AX6A-CA88 for SEP 1993). With these codes enabled, the games will boot up in Japanese and display "Gauntlet" in the main menu. However, the title screen continues to read "Gauntlet 4".

The Japanese version features a warning about making any changes to the configuration of the Sega Tap (Team Player, outside Japan) before the system has been powered on. When set to a region other than Japan, this even shows up in what approaches English. This warning is entirely absent in the western versions, although the manual does similarly instruct that the Team Player or 4-Way Play (the game supports either) should be set up before powering on the console. 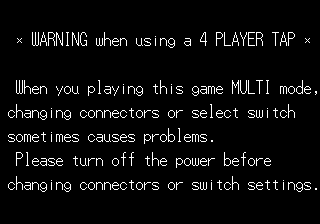 Despite being unused, the warning text is still present in the international version's ROM; an attempt at an improved translation was apparently made before they decided to cut it. The above image is probably how it might have looked in-game.

The game's logo was altered to add a "4" to the international versions. Former Tengen employee Chris Tang recounts:

I wrote a proposal to give it a full-fledged action/RPG mode similar to Dungeon Explorer for the TurboGrafx/PC Engine by doing things like turning score into experience points with upgradable stats, adding shops for equipment and items, and giving the game a storyline with elemental worlds, bosses, and multiple endings. I believed that these were the features that were needed for the game to best fit the expectations of the time.

[...] what was done was such a monumental and significant achievement that we re-branded the game into Gauntlet IV with the "Episode IV: The Castle of Succession" Quest Mode as its standout feature – and it exists as one of Tengen’s very best, critically-acclaimed releases.

Additionally, the international versions increase the right margin of the HUD player text by eight pixels across all game modes.

Chris Tang was added to the Special Thanks section.

For whatever reason, every instance of "riddle"/"riddles" in the Japanese version's introduction and endings was replaced with "mystery"/"mysteries". No other text was changed.

Chris Tang was again added to the Special Thanks section.