The final piece in the original Halo Trilogy. Halo 3 was highly anticipated on account of actually providing an ending to Halo 2, and lived up to expectations by introducing four player online co-op, the impressive in-engine Forge editor and the gameplay recording Theater alongside the usual impressive singleplayer and multiplayer offerings.

There are a couple unused enemies that still exist in the game's data.

This is an alternate Infection Form that explodes like a plasma grenade when popped. While the model data is nonexistent, the render_model tag and reused shaders suggest it was identical in appearance to a normal Infection Form.

This Flood Carrier variant is left over from Halo 2, but because the Jackal Shield weapon is part of the Jackal model in Halo 3, there is no shield for it to spawn with.

A prototype of a slow moving Shade Turret with no textures that can move on spider-like legs.

There are several unused cinematics that still exist in the game's data.

A cinematic in which Sergeant Johnson helps the player calibrate video settings. A pre-rendered version of this is used in the Halo 3 Essentials disc included with the Collector's and Legendary Editions of the game. The original cinematic tags and resources are still present in the mission Crows Nest and can be played in-game with some hacking.

A half-finished cinematic in which Master Chief releases 343 Guilty Spark from imprisonment on The Ark.

An extension on the reveal of the Covenant tower in the beginning of the final mission, Halo. The dialog indicates that it was supposed to be a suicide mission, until Johnson showed up.

An extension of the cut-scene from The Covenant in which the Scarabs drop from Orbit. Presumably the camera traces the Pelican and Hornets as they descend.

A rather unnecessary intro for the Scarab introduction on The Storm. 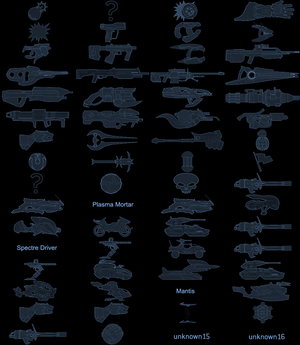 In the sprite sheet containing the icons used for the Post Game Carnage Report, there are a few that go unused. In the final game, kills using the Power Drain fall under the category of explosions. There are also hints the return of the Halo 2 Spectre turret. Other oddities include placeholders like "Unknown15", "Unknown16".

"Plasma Mortar" from the PGCR sheet has an actual image in one of the game's fonts. It is meant to represent the Wraith's main cannon, but the entire Wraith icon is used in the actual game instead. It can be seen in-game using the unicode character E128.

Various scripts read by different voice actors were found. They are inserted into the respective cut-scene for convenience.

Various pieces of dialog that were to be used in Campaign compiled together. 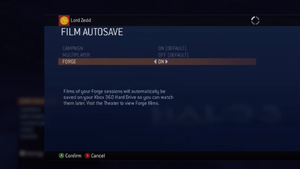 A cut menu in which you could set which game modes can automatically save theater films. While the toggles themselves save to your profile, nothing automatically gets saved regardless of what you choose. The feature was likely cut to prevent a player from leaving it on and filling up their hard drive, or it was created early on before recent films were stored in the console's cache.