Hitman: Contracts is the third title of Hitman series. It is a partial remake of the first game, Hitman: Codename 47.

These weapons and items can be obtained only through game console (using the command GIVEALL) or cheat menu (always using GIVEALL). Near all aren't truly unused, but just unusable to player. Always near of all can't be concealed or re-pick-upped once selected 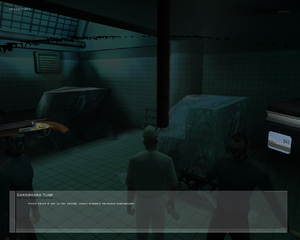 The Cardboard Tube is the only weapon that can be spawned also with the cheat "IOIPENNY" (a confirmation message will display if correct). It is an intentionally hidden weapon, and very deadly, capable to kill with just one hit (and make enemies fly!). Strangely, it can be detected by metal detectors and cut throats when behind an enemy. 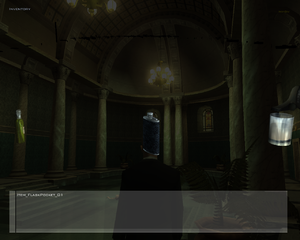 Nothing to say, just a flask pocket. This flask is seen in a cutscene. 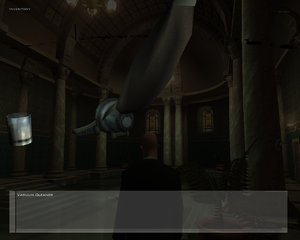 The Vacuum Cleaner appear only Traditions of the Trade, used by the guys that clean the hotel. Normally only them can carry it, but using cheats can be spawned in the inventory. Unfortunately you can just equip it and stop, don't have any purpose when used by 47. If you want holster the Vacuum Cleaner that will just dropped, and will be impossible to pick-up it again, forcing to activate the cheat again. The walking animation is the same as pistols 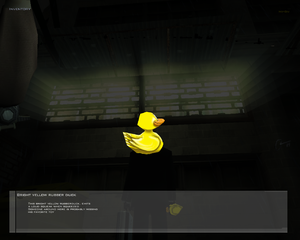 Someone around here is probably missing his favorite toy"

A "strange" item is a... Rubber duck. It can be spawned the first time in "Slaying a Dragon". The purpose is unknown, also because when you equip it, you can't do anything, just holding in your hands. If dropped, it can be picked up, but will not display in inventory, forcing to activate the cheat again. Maybe it should have appeared in "Traditions of the Trade", in the pool, but it isn't.

This build was leaked amongst +400 PS2 build leak via Project Deluge. This build differs a lot from the release.

While some mission names lasted to release, most of them were different in earlier development. It is notable however, remade Codename 47 missions had their original names.

In Asylum (Sanitarium in this build) Aftermath, there is an unused NPC. While his in-game name is unknown, by looks of him it's easy to assume he's just a buffed model for Orderly NPC.