HITMAN III, HITMAN™ 3 (2021), or HITMAN™ 3: This Subtitle Joke Has Gotten Old Now is a stealth-action/conspiracy thriller that serves as the finale of the story arc first started in Hitman. The game gains a photo mode, 47 loses his Electrocution Phone, and Diana loses her job. As with Hitman 2, the game has Mission Pack DLCs for the past two entries, so now all of the games are under one roof.

It only took them five years and two publisher switches!

A lot of the unused content present in Hitman and Hitman 2 can be found here as well, and while they share the same general file structure, IO Interactive did some general clean up of assets while optimising the game, both shrinking the filesize down of the game by over 100GB, and more pertinently to us, it means not everything is accounted for from those entries. Anything of interest to the first two games should be added to their pages, not here.

Temporary audio for Carpathian Mountains, recorded by the developers.

The ICA Data leak facility cutscene in Chongqing has some interesting oddities and oversights. The leak lists sanctioned targets throughout the past three games, but a fair few of the targets are missing from the database (Sister Yulduz, Klaus Lieblied, the Hitman 2 Elusive Targets, Wazir Kale, The 2016 Bonus Episode targets, Dmitri Federov, The Special Assignment targets, and the Sniper Assassin targets), despite some of the background NPC's referencing these characters in-game (such as Mark Faba, a Hitman 2 Elusive Target, being referenced in Mendoza and is not part of the leak).

There's also the matter of the below oddities too:

Orlando and Renzo Caruso originate from The Brothers, an unused Elusive Target mission from the first game in the trilogy, and has never actually appeared (legitimately) in the trilogy. Serena Washington was the original name used for Sophia Washington in the second game's game files (as can be in Hitman 2's page, this was used in some dialog recordings, and was also accidentally included in her bio in Hitman 2 before the first patch fixed it). History repeats, and her early name has now been accidentally included here too, but has yet to be changed (as of writing anyway).

If you manage to kill Don Yates early, the game has specific contingency voice lines for Diana and 47, suggesting at one point in development, 47 was able to leave the hill without Diana moving from the lookout spot. Killing Don Yates is not normally possible, as he starts in the basement of the vineyard, meaning the only course of action would be to use cheats, or shoot the Asado pit from the hill, which forces the usual routines to activate for the targets to play out, getting Don out of his house, and can then be killed. This can also be done much more simply with the RFID Coin exploit. Another contingency voice line exists for Diana and 47 for when you kill both Don Yates and Tamara Vidal too, and can be triggered in much the same way. If Tamara is killed before meeting up with Diana, the game respawns her normally. 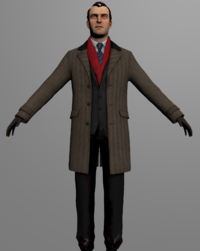 For reasons unknown, the younger version of Erich Soders used in the "Legacy" cinematic, as well as in a photo in Freedom Fighters, is present in this games' version of Mumbai's game files. It was likely misplaced here.

Some of the this game's Elusive Targets have alternative names in the top-right corner at the end of the mission briefing cutscenes, suggesting the missions were renamed during development.

Joanne Bayswater ("The Iconoclast") has completely different clothing in what appears to be an early concept for an Elusive Target, back when they were known as Ashley Lowe. The suit for Joanne is a recolored variant of the suit used for Hitman 2's Sophia Washington.