Hitman: Codename 47 is the first game of the Hitman series. The world's introduction to a cold-blooded assassin with severe bladder issues. This game only ever saw a PC release, leading to the developers remaking certain levels in Hitman: Contracts.

In the first level, Dr. Ort-Meyer makes several small errors. He suggests you take a gun from a nearby table (it's actually two crates), misidentifies an AK-103 as an AK-47, and refers to Fiber Wire as Piano Wire. While an AK-47 is present in the Colombia levels, the AK-47 that may of been present in the tutorial level must have been changed to an AK-103 late in development.

It's likely that the lines were recorded to match earlier names and locations before they were changed to the current ones. 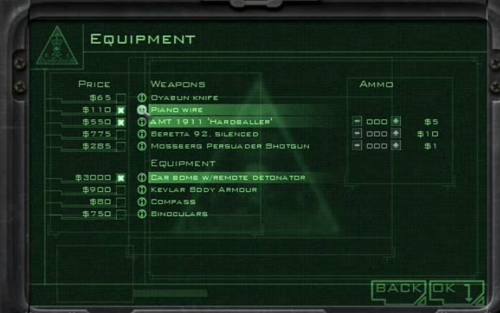 Screenshot of the fiber wired being named "Piano Wire" from the demo. 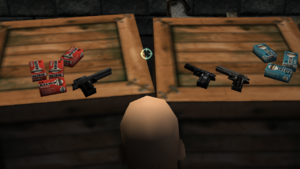 Weapons are on two crates, not a table. 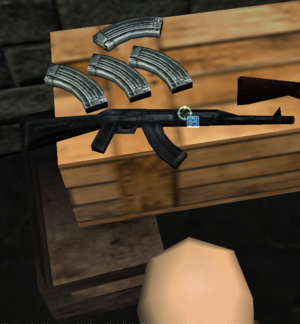 An AK-103 is on the crate, not an AK-47. Thus making all the facts Dr. Ort-Meyer spits out about the weapon pretty meaningless.

Using the cheat Giveall in certain levels gives the player a few items not available through regular gameplay. Two are weapons (Derringer in TLHA and Traditions of the Trade, and a blowgun in Find the U'Wa Tribe), while the others are a vacuum cleaner (Traditions of the Trade) and a train yard switch (Gunrunner's Paradise), the latter of which will instantly crash the game if used.

Before we got the iconic, stoic voice of David Bateson we had the voice acting talent of what is said to be Dan Russell. Codename 47 seemed to have a more action-movie vibe, before changing tone in late development. 47 used to be dropping quips and one-liners quite often during cutscenes and after firefights. A number of audio files have been overwritten by Bateson's lines, but a good chunk of the original files are still on the disc.

While it was previously believed that wearing the bellboy outfit would make 47 speak one of the previous voice actors lines, this is actually just an error on a developers part. The audio file Agent 47 speaks in this video is: "C3_1_Dialog_Receptionist_4_2B". All of 47's audio files end in H to denote they are lines meant for him(H for "Hitman"). That B at the end denotes the line is meant for the bellboy, but was given to 47 for some reason. If you listen to the bellboy's voice or listen to the audio files you'll see the bellboy has the same voice that 47 mistakenly has in this one instance.