InkBall is a Windows game originally developed for Tablet PCs, but was later bundled with Windows Vista as a mouse controlled game. Strangely, it was removed in Windows 7 for unknown reasons along with Tinker and Hold 'Em (both of which were Ultimate Extras games), despite the rest of the Windows Vista games appearing there.

On Windows XP Tablet PC Edition, a pen tablet was required to play the game properly, as the mouse cursor was not visible inside the game window. However, pressing Alt twice while playing the game will cause the mouse cursor to show up. In Windows Vista, it can also be played using the mouse. 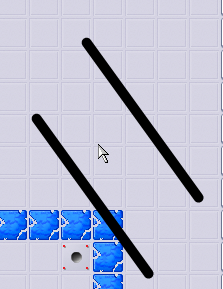 Two lines made with the line mode and the cursor being changed to a normal one.

The Vista version of the game updated its icon to a Vista-style icon, whereas the original XP Tablet Edition uses an icon in line with the OS' other icons.

The Windows XP Tablet version includes a .CHM file containing basic gameplay information and a generic Welcome to Tablet PC section. In Vista, this .CHM file is replaced with a help section accesible from the menus contained in a .MUI file and viewable though Help and Support (helpctr.exe). Oddly, no help documentations mention the block counter or the ability of placing gained blocks with right-click.

The Vista documentation is a modified version of the Playing Inkball page. 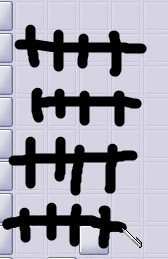