The killer app in Microsoft Plus! 98 if you didn't like golf, marbles, image editors, CD players or McAfee. This page documents the 2007 version of Spider Solitaire included with Windows Vista and 7. 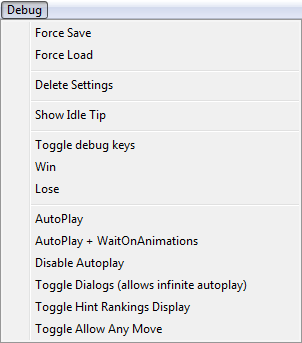 Like 2007 versions of Solitaire, FreeCell, and Minesweeper, this game has an internal g_debugEnabled variable. As well as the block & pause modes and logging as described on the Solitaire page, setting it to a non-zero value enables this debug menu.

Amongst the obvious options:

Running the executable with the -solverdebug argument adds a third part to the status bar of the following format:

PM is the number of possible moves, and the Sx[y]->Sz[w] portion are the possible moves (card y on stack x can be placed on card w on stack z). The other values are currently unknown.

This is also present in Solitaire.

In the Vista/7 version, an interesting feature that isn't documented anywhere (Help Menu-wise) is XInput (gamepad) support – if the game detects an Xbox 360 controller plugged into a USB port, the P1 corner on the controller will light up, signifying the controller can be used. Possibly undocumented because Microsoft thought people were too used to the traditional controls, and a gamepad wouldn't work for a card game. It's a neat little feature, nonetheless.