One of the card games that were remastered for Vista / 7, only to be killed off in 8. 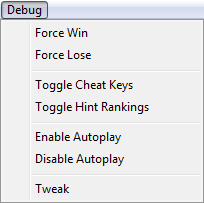 As with many of the other included Windows Vista / 7 games, this has an internal g_debugEnabled variable. When that variable is to set to a non-zero value, it replaces the normal menu with this one. "Toggle Hint Rankings" and "Tweak" have no code behind them, while "Toggle Cheat Keys" enables the ; key which lets the game play the next move.

Setting the g_debugEnabled variable also enables the cheat keys allowing any move, block, and pause modes. It also logs as described on the Solitaire page.

An interesting feature that isn't documented anywhere (Help Menu-wise) is XInput (gamepad) support – if the game detects an Xbox 360 controller plugged into a USB port, the P1 corner on the controller will light up, signifying the controller can be used. Possibly undocumented because Microsoft thought people were too used to the traditional controls, and a gamepad wouldn't work for a card game. It's a neat little feature, nonetheless.