GeoSafari for Bob is an educational game that was bundled with Microsoft Bob, which can only be played if Bob is open.

A message from a developer who evidently likes the game's mascot, Hank Elephant.

These strings are all leftovers from Microsoft Bob's GUI.

A unique icon of Hank Elephant is present alongside the used icon of the Bob logo.

This text shows that at some point in development, Hank would be available as one of Bob's regular guides instead of being limited to GeoSafari. If you move HANK.ACT to the ACTORS folder in Bob, you will be able to use him as your guide in Bob, though he is only partially complete: he is missing a background for the guide chooser (it uses a random part of his body), and about half of his text is generic placeholders. The same goes for Lexi from Bob Checkbook, though Lexi is more complete, with a background and less placeholder text. Trying to force GeoSafari for Bob to use any .ACT files other than Hank's will crash the game, as Hank's .ACT file contains special data used by GeoSafari. 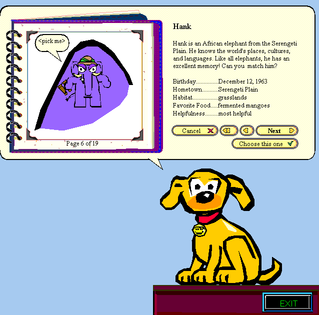