From The Cutting Room Floor
Jump to navigation Jump to search
This page contains changes which are not marked for translation.
Other languages:
English • ‎polski • ‎русский • ‎日本語 • ‎한국어

FreeCell is another all-time favorite among lazy workers. It managed to spawn quite a lot of clones seeking to improve upon the original.

Unlike its sister game Solitaire, the debug menu is still accessible here. Press Ctrl + Shift + F10 to trigger a dialog box offering three options: Ignore, Retry, and Abort. Ignore just closes the message box, Retry causes you to lose when you make your next move, and Abort induces an instant win.

The menu was likely there to check whether the win/lose stuff works properly, as there doesn't seem a point in cheating in a game like this. 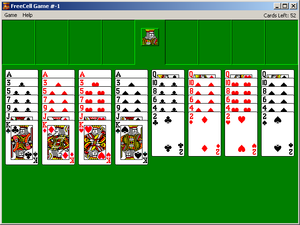 The game lets you specify the seed for the RNG used to shuffle the cards. The game has a few trick seeds that result in special deals.

The Windows XP version receives a new icon, with the old icon used as a low color depth fallback.

The Windows Entertainment Pack version has its own About screen. The Win32s version uses the Windows About screen, as did the versions that came with Windows 95 and later.

The Windows Entertainment Pack and Win32s versions have a hidden "Standard mode" and "Fast mode", activated by pressing CTRL+F1 and CTRL+F2, respectively. These appear to be absent in later versions.