This page details one or more prototype versions of TicTactics.

The tiles are bigger in the 3D prototypes and were likely shrunk down in TicTactics to save screen space. The lines were also changed from light grey to white and overlapping lines were removed in TicTacToe 0.6.

As mentioned above, the board is much bigger in the 3D prototypes and none of the prototypes have a menu. A border was also added around the board in TicTacToe 0.6. 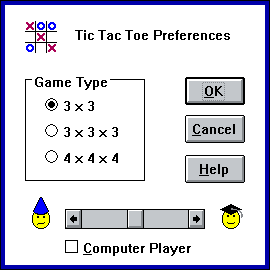 TicTacToe 0.6 is the only build of the game with a Preferences menu, which can be accessed from the About dialog. It's almost completely non-functional, though: the only settings that are semi-working are the Game Type settings, which only change the game's icon to match the selected board size, but not the board itself.

The "About" dialogs in the prototypes are very different – the only signs of official Microsoft involvement are in the names (Microsoft used the firstname-lastinitial format for their email addresses at the time, and probably to this day, and at the time people were generally referenced internally by that format too). Duff Software was a name used by Microsoft developers for unofficial projects, usually games, as explained here. TicTacToe 0.1's about dialog says Bogus software instead.

All three prototypes credit Minesweeper's Curt Johnson, whose credit was removed in the final.