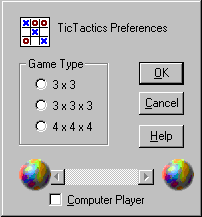 This options screen isn't used at all in the game, which instead has the options available from the drop-down menu. The developers probably thought it was useless to have a dialog box for the two features that can actually be changed.

The "Computer Player" part references two non-existing icons, which would have denoted the difficulty level. Interestingly, it can be unchecked - maybe the game once featured a two-player mode?

Interestingly, the missing icons are present with the game's source code (included in the leaked NT 4 source), along with 2 icons depicting the 3x3x3 and 4x4x4 modes.

In 2004, a large portion of the Windows NT 4.0 and Windows 2000 source code was leaked. Despite most of them not being in NT 4.0, the source code for several Microsoft Entertainment Pack games were included as well. These oddities are also present in Rattler Race and Minesweeper.

At the start of tictac.c, a couple alternate names for the game are mentioned.

In an early version of the game this message would appear if it was ran from "X:\\WINGAMES\\TICTACTO\\TIC.EXE".

This would appear if an early version of the game was ran after October 1990.

Adding Menu=1 to the [TicTactics] section of entpack.ini disables the menu. Minesweeper has the same hidden option.