The Super Nintendo port of the original Genesis Donald in Maui Mallard.

Just as he is about to quit his job and spend the rest of his life as a silly and simple duck in sailor clothes, the detective who is also a ninja Maui Mallard decides to do one last mission: search and find the missing idol statue of Shabuhm Shabuhm before the island it protects explodes. But that won't be easy since everyone in the island wants him dead for whatever reason... 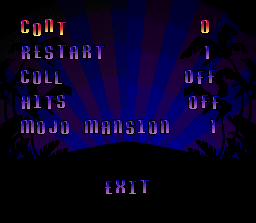 At one time, Debug was available as the fourth option on the title screen. However, it was disabled, and now cheat codes are required to access the debug menu.

On the title screen, move the current selection to the invisible fourth option, and press Start.

Same directions as above, but after moving to the 4th selection, disable the code before pressing Start.

This level password was "removed" and made impossible to enter. Instead, use these Pro Action Replay codes and enter BBBBBB as the password.

According to the options menu, this password is supposed to take you to "Shabuhm Temple", which seems to be placed after the final level, Mojo Stronghold. Unfortunately, there doesn't seem to be any remains of this level, so the game sends you to a broken version of Test of Duckhood Act 1 instead.

The effects of the following passwords, if any, are currently unknown:

The game was released under the Maui Mallard in Cold Shadow title in North America, where Disney was concerned the Donald Duck name would hurt its commercial viability.[1] The European and Japanese versions thus use a different title screen to the one used in the US: