Another addition to the awesome SEGA-developed licensed Disney games, this time featuring Donald Duck on a treasure hunt.

Similar to World of Illusion, there are remnants of a free-movement god mode. This time around, it can only be triggered with Pro Action Replay (PAR) codes FFEE07:00FF (Kega) or FFEE06:00FF (Gens). To cancel it, disable the code and press A + Start.

Donald waving his arm around in-air. Purpose for these is unknown.

Unused variants of jumping and landing sprites with varying levels of foot shading.

One of five frames meant for Donald falling in the intro that gets skipped over in-game, leaving only four getting used.

A short tune. It is unknown where this would have played.

Depending on the region of the console, Quackshot will run in Japanese or English. Use the following Cheat Codes to run the game in the required language:

Various changes were made to the 1.1 revision, mostly optimizing things. 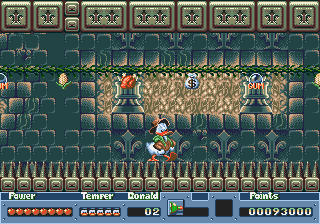