A Donald Duck action game originally released for the Genesis in Europe and Brazil and later ported to the SNES, Game Boy and PC. It features Donald Duck as a Thomas Magnum-esque detective with ninja skills on a gritty and stylish tropical island adventure. 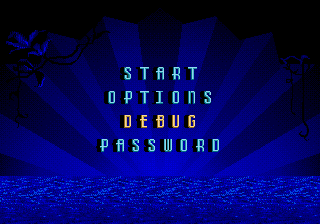 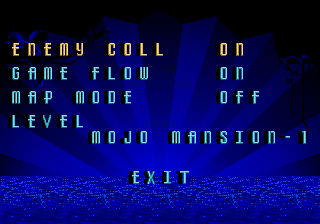 In the debug menu, Enemy Coll(ision) toggles whether Donald is invincible to most enemies and hazards.

Deactivating Game Flow will make the game return to the main menu after a level is cleared.

Map Mode will bring up a non-playable view of the map. Note that you still can be killed in the rising lava/acid levels.

Finally, the Level option changes the level the game starts on. Choosing a Babaluau Baby bonus level and then clearing it will send you to the next one or back to the menu after the fourth level. Losing the bonus levels in this way will count as a death.

In addition, the debug menu enables the following commands during gameplay:

The Map Mode described in the previous section brings up a non-playable view of the map. However, memory address $FF2181 is reserved for a different type of Map Mode, one that can be used during gameplay. To toggle it on, use Pro Action Replay code $FF2180:xx01, where xx is whether you want the debug menu, above, enabled with it (00 = off, 01 = on).

While paused, hold A and move the D-Pad to place Donald anywhere on the map. Press C to advance one frame. Beware that moving to certain parts of some maps will crash the game.

While not released in the US, the game was sold in Brazil and had a few changes from the EU version. Most passwords were changed, for example.

The Brazilian release features a series of tutorials that play after the player dies in the first two levels.