Ninja Gaiden is an action game by Tecmo that has awesome cutscenes. And ninjas. And more ninjas. 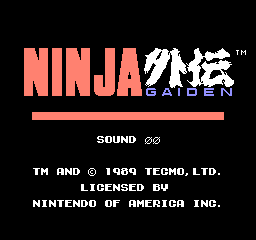 There is a regular Sound Test mode inside this game. To access it, at the title screen, or any time during the Intro, hold Down + Left + A + B + Select, then press Start. 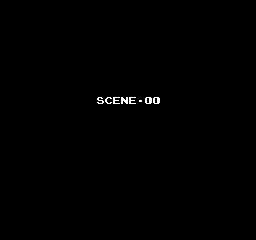 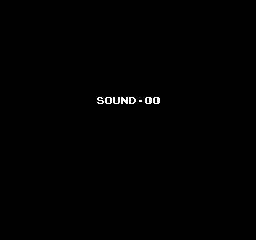 It is not normally accessible, but is functional. Game Genie codes AZUTYSXT+OTUVASXV+EGUVPSXT (for the US version), AZXTGSXT+EGXTTSXT+OTXTISXV (for the Japanese version) or AXKTYKGZ+OVKVAKNN+EKKVPKNY (for the European version) will call the level select after the Act number screen. Only the word SCENE and a number is displayed on-screen. You must hold the A button and press Left or Right to choose the room. Room #15 is the last valid room.

To enable the different Debug Sound Test, in addition to the Game Genie codes, at the Act number screen hold Up + A + B and press Start. Use the same controls to play music and sounds as for the Stage Select. To exit the Sound test, play music index 00. In the European version due to general code changes, you couldn't see an actual text, but the code is still working.

There is completely unused music data at $03:$BDFD. Use the Game Genie codes SYEAUALN+SLEAKENE and you can hear it in Sound Test mode as sound with index 44.

A portion of an earlier version of the script is located at 0x1A7E9 in the ROM. The text contains two "forbidden" words and a couple of spelling errors, meaning Nintendo's censors hadn't touched it yet. A couple of credits are different as well.

Interestingly, a variation on this script was used, uncensored, in the Ninja Gaiden Trilogy rerelease on the SNES. It also forms the basis for the PC Engine port's English script, although with the "damn" removed.

In the Japanese version, the eye catch when starting an act gives each one a unique title. These were removed in all other versions.

In the Japanese version, some of the powerups are placed higher.

Joe Hayabusa's first name was changed to Ken in the international versions.