Yet another entry in the series of platformers with ninjas and rogue CIA agents, this time you go on a journey to avenge Irene's death.

The value at address $FFF9 (ROM address 0x20009) has several functions: it enables/disables debug mode, sets the last stage that can be played, and enables/disables between-level cutscenes. 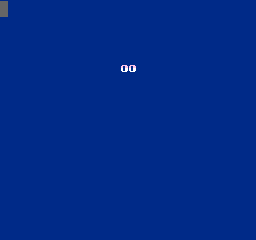 Bit 6 controls debug mode: if set (1), it is disabled, and if clear (0), it is enabled (Game Genie code AUNNOYAY). When enabled, the game will boot directly into a combined level select and sound test, which works as follows:

Additionally, pausing the game and pressing Select will toggle invincibility on or off.

Bits 0-5 set the last stage that can be played, presumably used in sample copies to prevent reviewers from spoiling later parts of the game. When the specified stage is reached, the stage number is reset to $00, returning the player to the first stage of the game. This is set to $30 in the final game, though this is not a valid stage number. 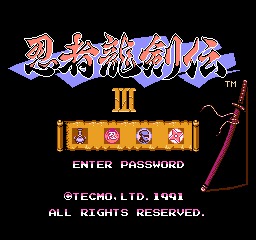 The Japanese version contains a password feature that was removed from the US version. The Game Over screen shows the number of continues left instead of the password the player would have gotten.

The game was made drastically harder for the US version, through various means to extend gameplay time: