This page details one or more prototype versions of Burnout 2: Point of Impact.

A PlayStation 2 demo build of this game exists that's compiled about a month before the final build. It normally only lets the player drive around Big Surf Shores. 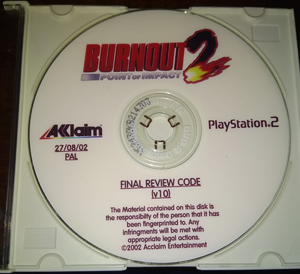 Being a review code compiled a week before release build, just about every single file is identical to the retail build, with the exception of the main executable.