Burnout Dominator is the last game in the series to be released on the PlayStation 2 and PlayStation Portable. It is, in some ways, a "best of" of the series, bringing back a few elements of the series that hadn't been seen for a while, like a scaled-down version of Burnout Legends. One of these elements is Boost Chaining from the first two games. Crash mode, however, was removed, which didn't exactly please long-time fans of the series. It also removed online multiplayer, because... reasons?

Stored at 0x2C62BC in all of the executables is the information about the build timestamp, and who initiated the compile.

The icon that displays when you crash, use the crashbreaker, or gain or lose your rating during an event. GLOBALE.TXD\Crashed is used instead for the crash icon.

The Bronze, Silver and Gold medals from winning an event.

It's a crown. It was unused in Burnout Revenge and returns here, unused once again!

The bar that shows your progression through the current Revenge Rank.

Present in the code are many strings and menus regarding online network play. This was present in the PlayStation Portable port, but in this port it was removed.

"Golf" is a reference to how Criterion sometimes refers to Crash Mode as "golf with cars."

While most props are shared between Dominator and Revenge, these are not, but still remain in the game's files. eCS_Lava is not used in either game. Perhaps there was going to be a Hawaii stage at one point?

The names of the three regions in the Burnout 3 World Tour. These were also leftover in Burnout Revenge.

This logo is technically only used for the XMB icon in the PSP version, however it is likely an oversight, as the PSP save icon uses the same logo as in the final release.

Likely intended to be shown when a new award is unlocked and allowed to be achieved. In the final game every award is open for achieving.

These four icons indicate that each newly unlocked series would display a star on it, as well as each series having a medal award of their own. 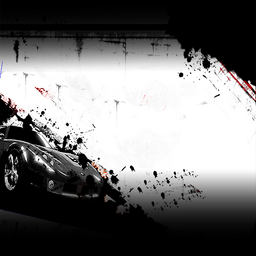 Normally only the EA Trax and the progressive scan menu has a background of its own. This, according to its filename, was intended to be used when viewing the records for the Record Breaker gamemode.

Just like in Burnout Revenge, this game also has its own checkpoint texture that goes unused.

This texture is normally 8x8 pixels in size, it has been zoomed in by 1600% so it's viewable.

MOVIES.RWS/PFEBG is a placeholder music track that was initially used before being replaced by Burnout 2002 Reprise. The track would have played on a loop whenever it was used, but the way it was looped is not known.

MOVIES.RWS/PEALogo is a higher quality version of MOVIES.RWS/XEL (where X is the letter for the language e.g. E for English, even though all those tracks are identical.) 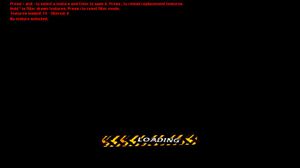 C_Loading is a basic, placeholder loading screen with no hints or images.

References to a cut game mode, Zone mode, can be found within the game's executable, as well as having its own ZONEMODE.AWD sound container. Whatever sounds it may or may not have had at some point during development, the .AWD has been repurposed for the very 1st tutorial event (Glacier Falls Burnout Challenge), as it is the only container to have the tutstart, tutflash, tutbstrfl and tutend sound effects heard in that event.

It also has a zonestart sound file which sounds like a slightly slowed down version of the positive message sound (posmsg). zonestart, just like the four tut* sounds, isn't present in any of the other event .AWDs except ZONEMODE.AWD.

In the final game, there are Signature Shortcuts. At one point, there were both Signature Takedowns and Shortcuts, and the former was most likely axed for difficulty reasons. This is supported by the fact that these strings are not leftovers from any previous game.

The codes below this section should work on all of the currently known retail builds. 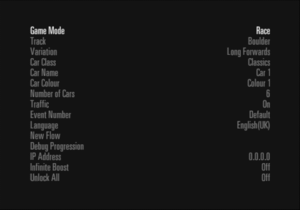 A debug quickstart menu that lets you enter any map and gamemode. 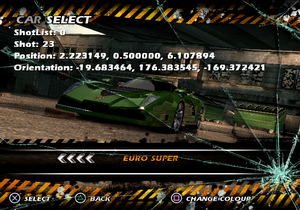 A debug display that shows information about the camera while in the garage.