This page details one or more prototype versions of Burnout Legends (PlayStation Portable). 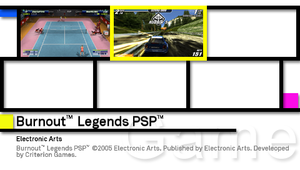 A promotional demo released as part of the Official UK Playstation Magazine's "Greatest Hits Vol. 1" demo disc (UCED-00316) that predates the retail version of the game by about a month. This build was compiled on July 8th, 2005, though some of the files date back as far as June 23rd, 2005.

The environment lighting is slightly different from retail, and cars have better-looking environment maps. The latter is most noticeable on the Compact Type 1.

A debug-enabled build presumably compiled on June 6th, 2005 based on text strings present in its executable, usually referred to as the "GS build" or "Game Sharing Build", due to its executable being discovered hidden in plain sight among the assets of the July 8th demo in the place of where a Game Sharing executable would normally be (UPLOAD.DAT in the DATA\ folder). Aside from possessing more developer features such as a full-fledged debug menu and code asserts, it's largely identical to the July 8th build.

This build contains two menus where several cheats can be enabled and disabled. The first of the two can be found in the Driver Details submenu, and the second can be found by entering an event then scrolling to the bottom of the pause menu.