Burnout 3: Takedown is the third game in the Burnout series, and the first to be published by Electronic Arts after acquiring Criterion Games. This game was released in September 2004 to massive critical acclaim, due to its gameplay, rather polished graphics and fluid frame rate that have held up even 18 years later, and significantly refining the trademark features of the Burnout series.

The sound that plays when you are taken to the garage to view your newly unlocked car cuts off two seconds in. The actual sound clip is about twice as long. 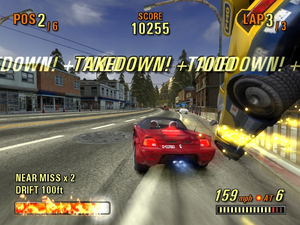 A version of the boost bar that can be seen in the earliest gameplay videos.

A gold medal, but with the shape of a car engraved onto it instead of a tick. There are no corresponding silver or bronze versions of this icon, suggesting it was a placeholder. Interestingly, the European and Japanese release has a lower quality version of this graphic.

A very low-res question mark. Would have been used to show an event had not been finished. Given the name, it would have changed to the Car_Medalgold icon when the event had been completed.

Intended for the Crash Nav. 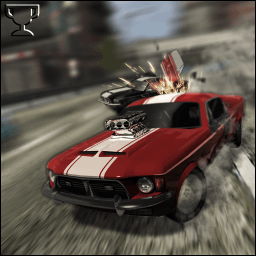 Concept art featuring a red Custom Muscle taking down a black Muscle Type 1 in Downtown. The art style of this image is very different to that of the actual game. Was used for a game mechanic called "Driving Skills" that was eventually replaced by the Takedown Trophies.

Concept art used for another game mechanic called "Aggressive Skills", which was also replaced by the Takedown Trophies.

GLOBAL.BIN contains a sizable amount of unused text, much of which details features that were cut from the final game.

Some of the names of the pickups found in Crash Mode have different names within the game's files.

Text that would have been displayed at the top of the screen depending on the sub-menu. Not only is all of this different to the final, they aren't even used in any of the retail demos. Even the E3 build of the game uses different text to any of these versions.

Appears in most demo versions of the game.

Among the text for the garage is a statistic for the car's handling, called "grip." This appeared in the previous game as "control."

Included under the text for the Video section of the Settings menu is a toggle for the aspect ratio. Likely used before the final game's method of retrieving the aspect ratio setting from the system's BIOS (or dashboard, in the Xbox's case) was implemented. Had there been a GameCube port, it would have used this option. These options can be seen in some July prototype builds.

This message would have been displayed when attempting to access the garage in builds where it wasn't present.

Remnants of a set of cheats (much like the ones featured in Burnout 2: Point of Impact), which would have been used by the developers can be found in some strings loaded into memory. The cheats can no longer be activated, though their equivalent effects can be achieved using a cheat device.

It is unlikely that these cheats were intended for use in the final game, given the presence of the "FORCE COMPLETION" option, although a prompt indicating the unlocking of a new cheat also remains in the final game, shrouding the cheats' original purpose in mystery: 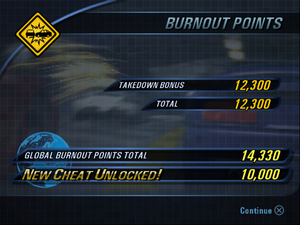 The above string was more than likely used in the Takedown Breakdown screen.

At one point in development, the Heavyweights were split into three separate series', as hinted towards by these strings of text found in the game's files.

What is even more interesting, however, is the inclusion of the Traffic series'. The fact that they are included under the heading of "Select Series" implies that they were made selectable at one point during development, though it is unlikely the developers ever intended for them to be selectable in the final game. The Traffic Series was most likely integrated into the Heavyweights series, as hinted by the presence of the City Bus and Delivery Van.

More evidence for this shakeup is the fact that the file names for the Oval Racer Special and Custom Coupe Ultimate's textures are Compact22 and Compact23, respectively, suggesting that they may originally have been in the Compact series.

Possible references to the Race Crashbreaker, which was not implemented until the sequel, Burnout Revenge, can be found within a large list of strings in the game's code.

The "Racebreaker" and "Ragebreaker" may have been two variations on the same powerup, or they may have just been two names used depending on which mode the powerup was obtained in i.e. Racebreaker for Race and Ragebreaker for Road Rage (and so it would follow that the Crashbreaker, which remains in the final game, would be for Crash Mode.) 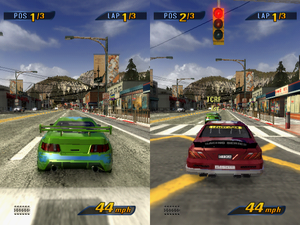 A toggle to change split screen split orientation from horizontal to vertical.

A mirror mode, which flips the track horizontally. Is only partially implemented; the controls are adjusted to account for the flipped view, but everything is flipped, including the HUD and all menus. This was eventually included in Burnout Legends.

By using these codes below with the PS2 USA release, an unused chrome type gets enabled for all the driveable vehicles. The texture also gets inverted for whatever reason, meaning red cars look like they're made of diamond, blue looks like gold, black - silver/platinum and so on. 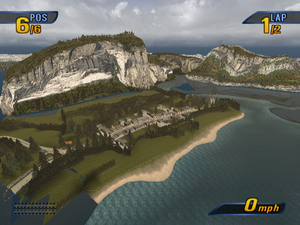 There's a value in memory which controls the current camera mode. Setting the value to 0x01 changes the camera mode to a free movable camera. With the codes below, you can switch between the free camera and regular camera using R3 + UP and R3 + DOWN.

Other camera modes can also be enabled by changing the 00000001 value to a different value: 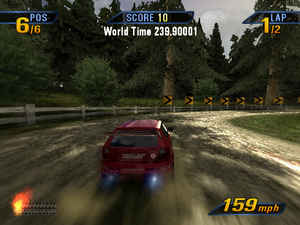 A fully-working "world timer" can be found and re-enabled through the use of the codes below on the PlayStation 2 version. The timer displays the amount of in-game time spent on the current track in seconds, accurate to five decimal places. The regular timer, on the other hand, only displays the amount of time elapsed from the moment you gain control of your car at the start of the race. It will not disappear when you are crashing, but other than this, it behaves just like the regular timer.

The Dominator Muscle's texture on the European PlayStation 2 release has its flame decals appear insanely faint - almost invisible, but are still visible in the preview icon.