Turok: Dinosaur Hunter is the first game in the Turok series and is an adaptation of the comic book series of the same name. It's also the first game made by Acclaim for the Nintendo 64. 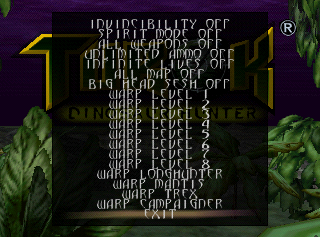 Enter NTHGTHDGDCRTDTRK as a password to enable a cheat menu, containing toggles for invincibility, unlimited ammo and lives, and a level select.

The German release replaces all human enemies with robots. Acclaim did go to the trouble of making new animations at least.