Yo-kai Watch: Wibble Wobble was the franchise's first venture into microtransaction-filled mobile gaming. Though the result is rather addictive and fun, the game in it's recent years was sadly plagued by high-ranked Yo-kai, paywalls to get said Yo-kai, and balancing issues that makes this game not beginner-friendly.

The American and European title screens replace Usapyon with Kyubi, moves the copyright text to the bottom right instead of the middle, and adds a Privacy Policy button to the title screen. Additionally, the European version adds a small icon next to the logo stating the language of the game.

Hailey (the girl on the far right of the screen in the Japanese version) was removed from the North American and European versions of the game, along with Usapyon (as mentioned earlier).

The reason for this is because Hailey and Usapyon are from games in the Yo-kai Watch Series that had not been released outside of Asia at the time of release in North America. Wibble Wobble was released so early in the franchise's life in America, that their presence in the game had to be cut, despite Usapyon appearing in the CGI intro that plays when you start up the app, and "Pyon" appearing in the Medal Points Shop. Oops.

While the changes to the title screen and the removal of Hailey's sprite on Uptown Springdale and Breezy Hills (alongside other related modifications) were not redone, both Hailey and Usapyon were revealed in-game in the North American version in November 2017.

The international versions contain a few extra apps in the main menu that the Japanese version does not.

The international versions replace Usapyon with Komasan in the "Records" app, and the journal cover for Record Notes is completely replaced.

This is not the case for the Slingshot Battle watch skins, as all versions of the game use a skin resembling the Yo-kai Watch U Prototype when you play equipped with the normal Yo-kai Watch.

The method to befriend Unikirin was initially changed in the North American and Korean version. In the Japanese version, the text in Slurpent's Medallium seal reads "Avaliable in the Crank-a-kai" (妖怪ガシャで入手できる). In the North American version, Unikirin was only available as a reward for the Top 5 in an event called a "Scramble Battle", which was usually held once a month. Alternatively, Unikirin can be pulled from a "Scramble Battle Coin", which is exclusive to the international version.

Unikirin was later added to the Lucky Crank-a-kai upon its introduction in June 2017 (and kept in with its replacement with the Oni Crank-a-kai later on) and the requirement text on his seal was modified as well.

A Wib Wob sprite for the Yo-kai Gutsy Bones has been in the game nearly since launch. Alongside his Wib Wob were Goldy Bones, who was used in one of the game's first events, and (interestingly) Glitzy Bones, who was considered unused for over 2 years until he was made a befriendable Yo-kai in a "Gates of Whimsy" event. This means that Gutsy Bones may potentially appear later on.

These three Yo-kai, Flicker, Loiter, and Schemer, are Wicked Minions from Yo-kai Watch 2. They do appear in Wibble Wobble, but they are not befriendable and only appear in stages. They do not have a medallium entry either, unlike other Yo-kai who cannot be befriended. These sprites could signify that they were originally intended to be befriendable through one way or another, but they have since gone unused.

An event button exists in the files as well, in both the Japanese and English versions. Their file name is labelled with the date 20151021 (October 21st 2015). The event button for Orcanos' event is also labelled with this date, so it is safe to believe that this event was planned for earlier in the game's life.

Alongside this, there is a map title in the files. While the name is identical to a permanent map, it's marked as an event in its name and has a different-colored shadow. Dame Dedtime (pictured on the button) is fought in the permanent map of the same name and this is a major location of Yo-kai Watch 2's story. This means (despite the button depicting the Yo-kai World in the background) the event would have taken place on this map, and may have been intended to reflect the story of the console game before they later went with the permanent story updates.

An unused tip button resides in both versions, reading "Whisper's Tip". This is a scrapped feature from the beta version that gives tips for organizing your Wib Wob team.

A leftover from the beta. When a Yo-kai dropped an item or their Wib Wob in the beta version, the drop would be visible for two seconds before being sent to a chest at the top of the screen. If a Yo-kai dropped something while still mid-stage, you could tap the chest to view the drops. In the final version, item & Wib Wob drops are visible regularly after they first appear until the stage is cleared.

This unused graphic is used in the mainline games. As the name suggests, this graphic will follow with a description on what an item will do to a Yo-kai you have on your team. It goes unused in Wib Wob, since you cannot feed Yo-kai that are on your team. A similar graphic that says "Use on Opponent" is used in Wib Wob and Puni Puni and serves the same purpose, except it tells you what an item will do on an enemy.

An image titled map_btn_mission01.png featuring a quote bubble with an orange flag and the word "Request" written on it exists in several versions of the game's data. It may have been intended to be used for an event, but it is no longer present in the Japanese version's data, so it is safe to assume that they have no plans to use it.

A Login Stamp background made for the Orcanos Event's sheet. Due to the Momonyan line (the four on the right) being replaced with the Fruitnyans in the American version of the event, it was dropped in favor of one using artwork of Orcanos. Another version with the Momoonyan line's replacement Yo-kai exists in the European data but was not used, likely due to it being made for an older Login Stamp format that is no longer present in any version of the game. 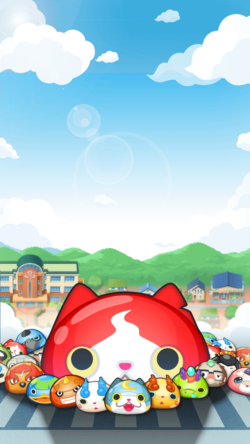 A splash screen image that is not used in the game at all. This is most likely an image from an earlier version of the game, given how weird some of the Wib Wobs look compared to their final sprites. 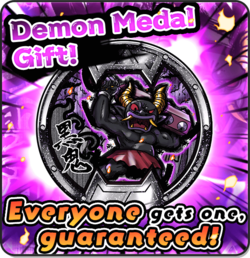 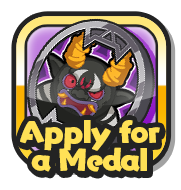 A well-known difference between events is the early Orcanos event. In the Japanese version, befriending Orcanos during this event would net the player an app on the Yo-kai Pad that allowed them to apply for a physical B-Medal of him. The English version took this out because B-Medals did not exist in the Western markets at that time (and no new medals were planned ahead of time for a game campaign), but several assets were still translated.

When Yo-kai Sangokushi was released in Japan, two full events and an extra campaign (another Orcanos medal giveaway) were held in the Japanese version to commemorate it. A good amount of content was translated into English, heavily implying they were looking to do the event, but it was scrapped likely due to licensing issues and most of its content was overwritten with blank files later on.

Even though Hailey Anne's sprite was taken off of Uptown Springdale and Breezy Hills, the dialogue that occurs when tapping on her was still translated. Some of this text reflects several localization choices that were changed later on.

A compilation of unused texts and other in-game configuration has been uploaded here: https://archive.org/manage/wibblewobblejsonfiles.7z