In the Japanese version, there are letters stored with the title screen graphics that spell "SAMPLE VER."

The game contains an unused, unreferenced text display routine and associated strings for what appears to have been a debug menu. The text strings can be found at ROM address 0x4581.

As with every other Kunio-kun game at the time, this one also went through some pretty drastic changes when shipped overseas.

The title screen was given a complete overhaul, unsurprisingly.

The main antagonist Todd/Tōdō is wearing a school uniform in the Japanese version, which was changed to a tanktop/pants in the US release. His portrait in this scene was changed accordingly.

Todd/Tōdō and Skip/Yamada speak in front of a construction site in the Japanese version. This site is apparently where Tōdō's father is building a stadium specifically for this event. The scene was changed to the "Thornley Industries" building in accordance with the new story.

All the teams and characters were renamed, with several of them getting a visual overhaul. Team Nekketsu (in white) underwent the most changes during its transformation into Southside High. While Kunio himself remained relatively the same when he became Crash Cooney, the rest of his team were given a makeover in some form or another: the second-in-command Sugata was renamed Cheese and was given a different hairstyle; the third member, Morimoto, became Dragon and was given slanted eyes similar to ones that the Dragon Twins have; and the last two members, Nanase and Ichijō, became two black characters named Sting and Noise.

Tōdō and Yamada, who were non-playable antagonists in the Japanese version, became Todd and Skip in the American version and were made into actual participants in the sporting events. Todd replaces Riki, Kunio's rival and captain of Team Hanazono (in blue), which becomes Washington High, while Skip replaces Ryūji, one of the Dragon Twins on Team Reihō (in red), which becomes Lincoln High. The other Dragon Twin, Ryūichi, is replaced by a new captain named Artie, a palette swap of Noise. The fourth team, Team Rengō (in green), which became Jefferson High, is only the team whose members were not changed between region. Rengō (which means union) does not represent a particular school, but instead is composed of members from different schools. Players of River City Ransom are likely to recognize Gōda, Godai and Nishimura as Ivan, Tex and Rocko, or as they're called in Street Challenge, Spreck, Clint and Baldy.

The CPU-only Oklahoma High School team (in purple) in the Japanese version became Team Thornley in the American version and underwent similar roster changes as the playable teams. Raphael, the sole black member of Team Oklahoma (whose design was used for Artie and Noise in the American version), became Crush, who uses the face as Riki, while Jimmy, a palette swap of the Dragon Twins (no doubt a reference to Double Dragon), became Foil, a palette swap of Sting.

In a matter similar to Super Dodge Ball and Nintendo World Cup, the Japanese version uses three palettes to represent the different races of characters featured in the game.

In Street Challenge, the second palette is used for almost all the characters, while the third palette is used for Southside High members Sting and Noise. The first palette went unused. Despite this, the palette change was only partially applied on the team and athlete select screens, which gives all the white characters the more pink-ish skin tone of their Japanese counterparts.

The "drug" sign on the drugstore was changed to a "health food store" sign, likely due to the negative connotations that the word "drug" by itself has. 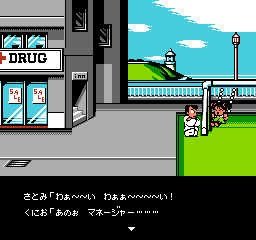 Also, the team's female manager will swing on the swing set if you move her to it. This little feature was removed from the US release.

The background of the "400 meter hurdles" event was changed from a stadium to an alleyway. The sky palette was also made brighter.

(Note: This event uses four rows of parallax scrolling, which have been combined into a single image here.)

The sparse mountains in the background of the "hammer throw" event were changed to a cityscape. Again, the sky palette was made brighter.

The background of the "swimming" event was changed from Japan to New York City.

The cityscape background was redrawn (the US version including the Twin Towers and other NYC landmarks) and the rooftops were recolored from gray to brown.

The background here was changed from a Shinto shrine to a city lot. It was also extended vertically by 16 pixels.

The characters also wear judo uniforms during this event, which was changed to their regular street clothes for the US release.

The screen that introduces the events was completely redesigned. The Japanese version features Riki's girlfriend Mami on a blue background with the word "NEKKETU" tiled on it. The US version changes this to a brick pattern.

The podium shown at the end of each event was changed from a very Japanese scene with cherry blossoms to a more dilapidated-looking city lot.

The Japanese ending screen features an animation of Momozono (the manager/cheerleader of Team Nekketsu) swinging on a swing set. The US version replaces this with an advertisement for Crash 'n the Boys: Ice Challenge, which would have been a localization of the earlier-released Ike Ike! Nekketsu Hockey-Bu. Unfortunately, the planned Ice Challenge localization ended up being unreleased. Of note is that every official emulated rerelease of the Western release of this game (3DS and Wii U Virtual Console, its inclusion in the Kunio-kun: The World/Double Dragon and Kunio-kun Retro Brawler Bundle compilation, and its solo Switch and PS4 rereleases) kept this version of the ending as is despite the advertised game having long since been cancelled. Ike Ike! Nekketsu Hockey-Bu would eventually be released in English in 2020 under the literally-translated title Go-Go! Nekketsu Hockey Club Slip-and-Slide Madness (forgoing the Crash 'n the Boys: Ice Challenge branded localization entirely in favor of a straight translation of the Kunio-kun version) as part of the Double Dragon and Kunio-kun Retro Brawler Bundle compilation for PlayStation 4 and Nintendo Switch.

The story in the Japanese version also concludes with a staff roll, which was strangely omitted from the US release.