Go-Go! Nekketsu Hockey Club Slip-and-Slide Madness is a hockey game where half the game is spent taking shots at your opponents' goal and the other half is spent taking shots at your opponents. There were plans to release it in North America as a sequel to Crash 'n the Boys: Street Challenge, dubbed Crash 'n the Boys: Ice Challenge, but it was cancelled. Therefore, it remained unreleased in the west until early 2020, when the game was eventually released worldwide in English (albeit under the original Kunio-kun branding rather than the Crash 'n the Boys themed localization as was originally planned) as part of the Double Dragon & Kunio-kun Retro Brawler Bundle compilation for the PlayStation 4 and Nintendo Switch.

Each team has five members available to fill four positions on the ice. There are two teams near the end of Scenario Mode that are never playable. Since the computer always uses the first four players, this leaves their fifth players unseen. Despite this, their graphics and data are still present. 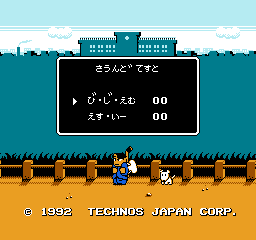 There are a few passwords that are never revealed by the game. Three are just omissions from the regular Scenario Mode, one will make Scenario Mode harder, and one brings up a sound test.