After a 25-year absence, Misako and Kyoko head off to save their boyfriends from being kidnapped.

sharedassets0.assets\sactx-4096x4096-BC7-Portraits-b05b1bec.png contains character portraits of Hasebe and Mami with alternate color palettes for their outfits:

sharedassets0.assets\Angel_Misako_01.png is an image for Misako's ghost when she dies in combat:

All of these locations have text detailing what the object in the world would be, coupled with a sprite(s) of Misako in the same position.

sharedassets62.assets\sactx-4096x4096-Uncompressed-World4-8e32c2cd.png contains a placeholder area for the Junk Yard:

sharedassets75.assets\sactx-4096x4096-Uncompressed-World5-b96c7e81.png contains a placeholder area for a few different areas: the Aquarium, the Beach Homes, the Theme Park, and Ocean Heights Park. 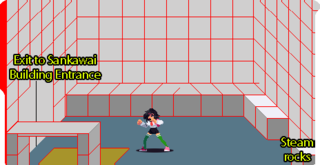 sharedassets8.assets\TEMP_NOIZE_Background.png is a placeholder for the NOIZE concert battle location. 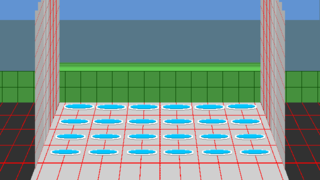 sharedassets4.assets\sactx-2048x2048-BC7-Tutorials-784d2904.png contains a screenshot of a noted trial version (based on text in the bottom-right), using a placeholder "Press X to join!" dialogue option instead of a button prompt, as well as pixelated numbers for possibly the damage count (the released game uses a stylized font). 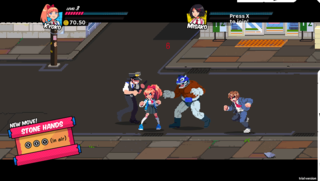 Within the primary music.bank, there's music for the entire game as individual tracks. An extra track, denoting an extra boss, remains unused.

Sex_Ed_film_new.mp4 contains a 40-second excerpt from an informational video dating back to the 1940s-1950s. This excerpt features a boy named Johnny, and describes how Johnny is quickly growing up and struggling to cope with the changes in his body during dinner. Based on the contents of the cinematic, as well as its filename, it may have been a placeholder for Abobo's puberty infomercial featured in the projection room, which covers a similar topic and is also greyscale.