Nekketsu High School Dodge Ball Club: PC Soccer Edition is a HuCard port of the Famicom game that was localized as Nintendo World Cup. It was actually the second port of the game on the PC Engine, coming out a bit later after the Super CD version, and is the more straightforward of the two ports, lacking the anime-style visual scenes and only having one exclusive team instead of the five featured in its CD counterpart. 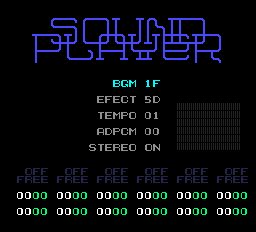 During gameplay, hold Run+II and press Select to access a fully functional sound test, that not only allows the game's music and sound effects to be played, but also allows their tempo to be altered and their individual channels to be enabled/disabled.