Renegade is the game that innovatively introduced the 8-direction movement to the beat-'em-up genre, and depending on where you were from, it was either a game where you go against those who attack one of your high school classmates or just a game of senseless street violence. It also debuted Technos' titular mascot, but he, along with most of the future Kunio-kun games, would remain a Japan-exclusive and wouldn't get a definitive identity in the West.

Hold 1P Start and 2P Start while turning on the machine to activate a test mode. The game will run through several test screens:

The US version curiously has a fourth boss quote, meant for Sabu. But it's not used and instead, just like in the Japanese version, he is silent when he throws Kunio off him and the generic "Wah!" male defeat sound is used when the player loses on Stage 4.

The high school setting of the Japanese version, which was somewhat inspired by game director Yoshihisa Kishimoto's youth as a high school delinquent, was changed for the US version to a ghetto/slum setting. This setting change was carried to the non-Japanese versions of the NES port. 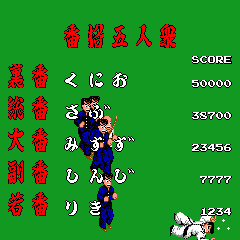 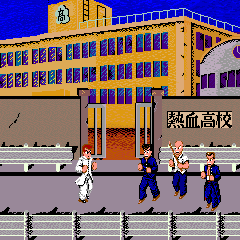 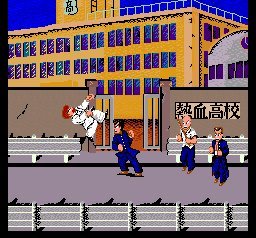 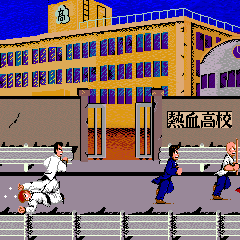 In the Japanese version, the game shows short sequences before each stage that give context as to why we're beating up everyone, they're all the same, only changing up the enemy characters depending on the upcoming stage. They show the enemies beating up Kunio's classmate Hiroshi, then Kunio chases after them. A 1-second looping track also plays exclusively here.

When cashing the enemies, Kunio says "mate konoyarou" (まて この野郎), a quote unique to the Japanese version which translates to "Wait, you bastards!".

There are no intermissions in the US version, the stages immediately, making the game lack an apparent plot. The flyer for the game does try to give a story, saying that we gotta save the city's population by fighting the gangs that have taken over the place.

The game's protagonist was changed from a high schooler in uniform dude with an open vest.

The player and stage bosses' life bars in the Japanese version show the characters' names. The cast of characters became nameless in the US version, although the international versions of the NES port would later gave them different names (except for Sabu).

The titular high school student that we control in the Japanese version is called Kunio (くにお). In the US version, the name was replaced with two separate graphics that indicate the players' turn to control the character.

The first stage was completely changed from an outdoor train station to an underground one, and the train became heavily vandalized.

The unarmed enemy student in school uniform became a guy wearing a tank top and his hairstyle was changed.

The bald enemy student armed with a stick became a dark-skinned guy and his white shirt was changed to a color-patterned one in addition to getting unbuttoned.

Riki, the first boss (and Kunio's future companion in later Kunio-kun games), had his school uniform changed to an outfit similar to the protagonist's. His hair also became longer and gained a headband.

The unarmed biker enemy went from having a mouth mask and sunglasses to what seems like either a full-face mask or face paint, his shirt also became a tanktop, received wristbands, and the hair was made longer.

The stick-armed biker received almost the same design change as the unarmed one, except he had sunglasses added, a reverse of what was the case in the Japanese version.

Shinji, the leader of the motorcycle gang, also joined the trend of being shirtless and with an open vest. Also, his hair was turned into just a mohawk with a ponytail and his mouth got covered with something.

The chain-wielding female student became a blonde woman with slightly longer hair and had her attire changed to a dress with an opened jacket and knee-high boots, she also became gloved in one hand.

The red-haired female goon became dark-skinned, her sunglasses and mouth mask got removed, she now wears a tank top with jeans, and her weapon was changed from a purse to a way more painful-looking spiked mace.

Misuzu, the leader of the girl gang, had her school uniform changed to a tank top with jeans and also got large boots.

The graffiti text behind the parked cars was removed.

The knife-wielding goons had their skin darkened.

Sabu had the red color in his palette slightly brightened, just that.

The impact effect when getting hit by Sabu's bullets or stabbed by his henchman was redesigned a bit and changed from white to red.

In the Japanese version, Kunio exits Sabu's building and meets Hiroshi, the two shake hands while other students clap. In the US version, the protagonist meets a girl and they kiss, it's not explained who she is though.

In the Japanese version, the Game Over screen has the background of Nekketsu High School's front. In the US version, it shows another variation of the title screen's wall, with a "The End" graffiti.