Yamada, the final boss of Downtown Nekketsu Monogatari, can be found in the game's files. Strangely enough, he has a seemingly full set of head sprites, suggesting that he was going to be playable. In the final game, he only appears in the game's ending sequence. Shown is a recreation of what he might've looked like in-game.

There is an identical debug feature in a couple of Technos games. Usually all debug code is controlled by a memory flag, hardwritten at the end of the ROM at address $FFF6 in M6502 CPU address space. Various bits of this variable enable or disable various debug features.

Bit 7 of the debug variable (to set it, use Game Genie code EKNYVYAA) switches between normal and "SAMPLE VERSION", which enables some debug features. During the game, hold Select on Controller 1, then press one of the following buttons:

When using these shortcuts, the money will be instantly increased to 10000, even if you lose, you will always be in 1st place in the current match. But if you additionally press Down at the same time with the mentioned buttons, you will finish exactly with the same amount of money you own, and so you can lose any match. 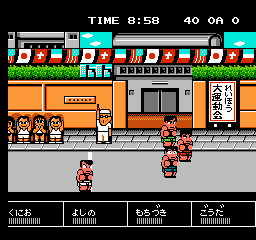 Bit 5 of the debug variable (to set it, use Game Genie code AXNYVYAA) enables a debug variable display during gameplay at the top-right corner of the screen.