Renegade is a somewhat reimagined port of the influential arcade game of the same name. It was the first game in the Kunio-kun series, the first home console game developed by Technos Japan, and also one of the first beat-'em-ups ever made.

You can choose which stage to start on by entering specific codes at the title screen.

The game was significantly reskinned when brought to the US, similar to the original arcade release.

The title screen was spruced up for the US release. It shows a deteriorated wall with the game's title written in spray paint. 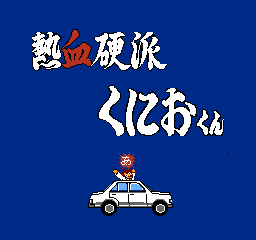 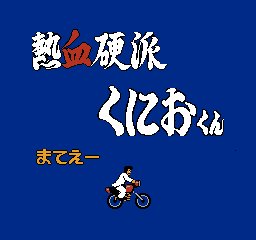 The Japanese version does have a bit of an intro sequence. Kunio's friend Hiroshi casually walks across the screen and is abducted by a car that drives past him. Kunio chases after the car on a motorcycle, shouting "WAIT!"

The US version doesn't really have any story to speak of. The manual basically just says "you're surrounded by punks, beat them up."

This level was changed from the outdoors Shinjuku Station to a shabby-looking underground subway. Surprisingly, signs advertising beer were added to the US release. How'd that get past Nintendo's censors?

Because of the aforementioned change, the windows inside the train are always black in the U.S. version regardless of difficulty setting.

In the boss area, the same changes from the first section apply. The "Shinjuku" sign in the background was completely removed from the US scene.

The beer sign next to the bar entrance was translated. Again, how did this get past censors...? 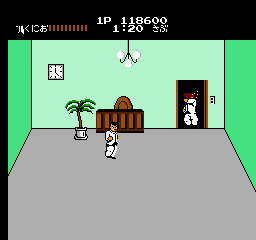 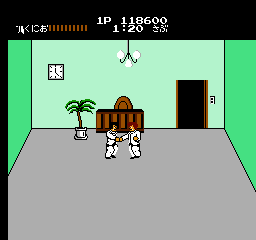 The door in the background opens. Hiroshi is standing there crying. He walks over to Kunio and they shake hands. Cut to credits.

This sequence was completely removed from the US release; the game jumps to the staff roll immediately after the final boss is defeated.

The health power-up was appropriately changed from a rice ball to an all-American hamburger. Amusingly, the game's manual shows a picture of the rice ball while still calling it a hamburger.