Danganronpa V3: Killing Harmony is the third mainline game in the Danganronpa series, but now the game has been filled with pretty horrible lies. 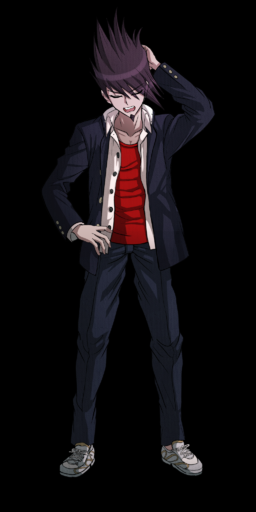 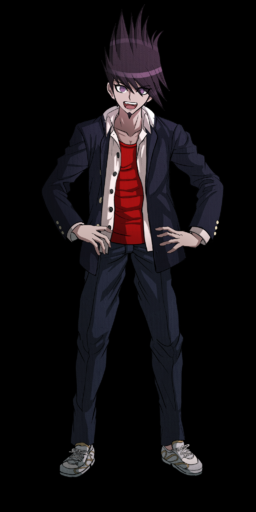 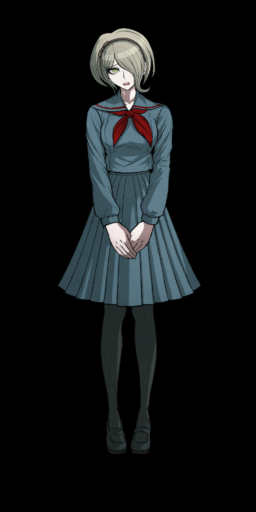 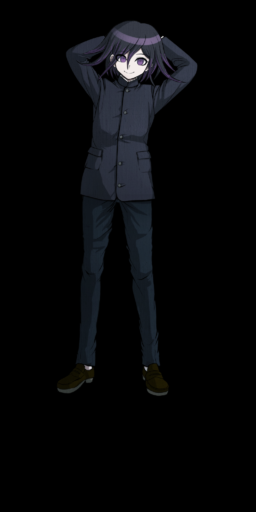 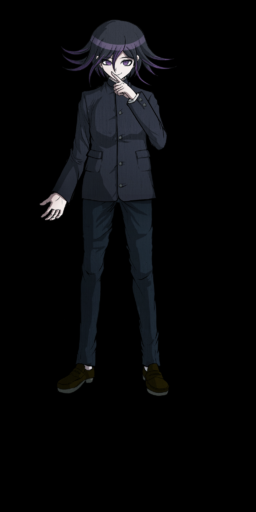 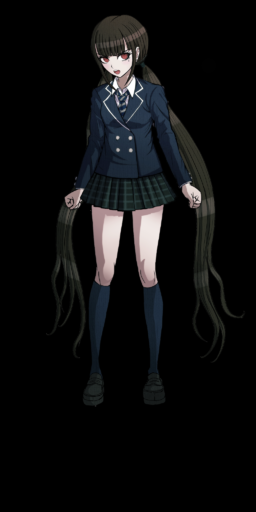 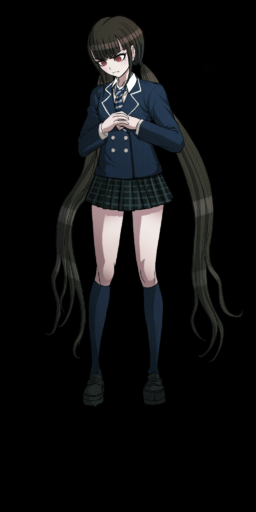 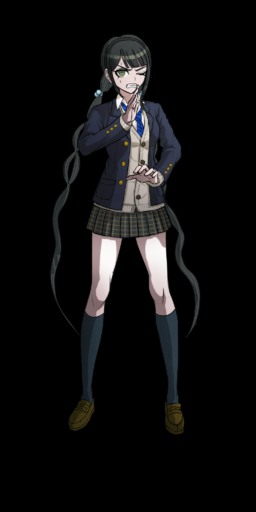 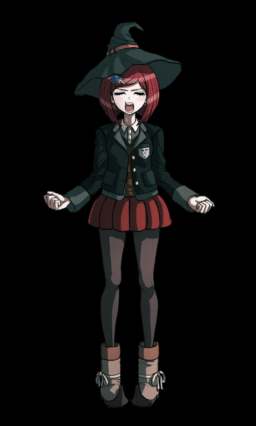 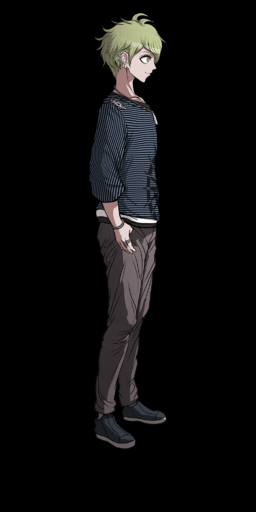 Despite the fact that Rantaro doesn't appear in any class trials, he has an unused Debate Scrum sprite. It was used in promotional materials to avoid spoiling who the first victim was. 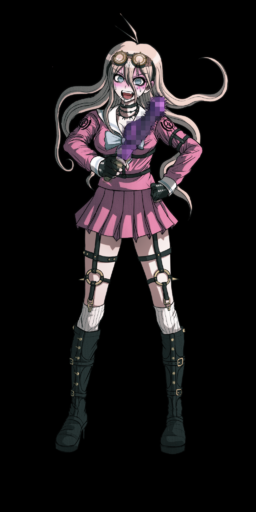 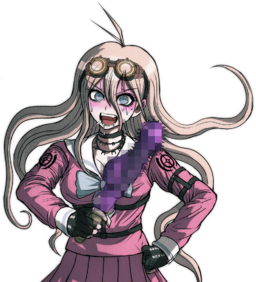 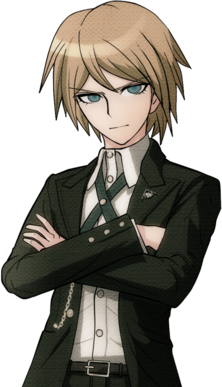 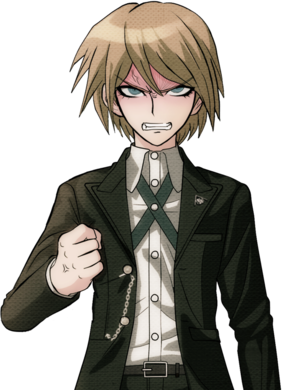 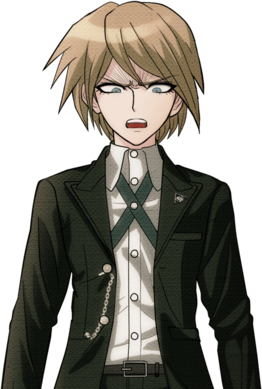 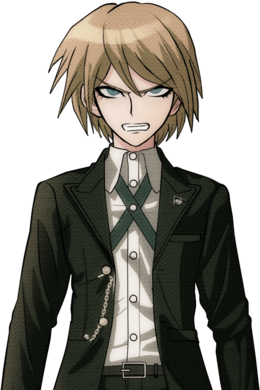 Sprites of Byakuya Togami without his glasses have been carried over from the previous games in the series, but are still unused.

In the game files, there seems to be unused versions of the pictures of Rantaro taken by the hidden camera. They are slightly different versions from the ones that were actually used in the game.

The door is missing some texture to it.

Rantaro's right eyebrow has a ring, which was removed.

Rantaro has no rings on his right hand and is closer to the camera.

In the files for the Virtual World, there appears to be an unused graphic of Tenko Chabashira's name written in Japanese.

Despite Shuichi, Kaede, Angie, Miu and Ryoma always being on the same side in every Debate Scrum they are in, they have Argument Bullet sprites for each side, so they go unused. Shuichi also has Argument Bullets for him wearing his hat, however he never speaks during the first Debate Scrum, so they go unused. Tsumugi's blue side bullet is also unused, since she's only on the player's side during the Chapter 1 Debate Scrum and doesn't speak in it.

Placeholder sprites for Rantaro's Argument Bullets exist for both sides of an argument. They both show Shuichi's face, but has text overlaying it that translates to "Amami".

An Argument Armament emblem that would have been used for Tsumugi Shirogane, but it goes unused since she never appears in it. 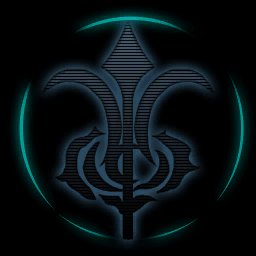 Trial dialogue icons exist for Rantaro, Monomi, and Usami. Since none of them appear in any of the class trials, these go unused. Tsumugi Shirogane has unused icons for cosplaying as Mukuro Ikusaba in her Junko disguise. Mukuro is the only student from the first two games Tsumugi does not cosplay as.

Just like in Danganronpa 2, images remain that depict points of interest that can be selected in a scene. Their in-game versions are included for comparison.

The AV room from the first chapter.

The shower room that is part of Ryoma's ultimate lab from the second chapter.

The staircase and tank used in Himiko's magic show during chapter 2.

Tenko's corpse after the seance in the third chapter.

The magic circle made by Korekiyo for the seance during chapter 3.

The map of the Virtual World from chapter 4.

The mansion rooftop in the Virtual World.

The crushed body in the hydraulic press from chapter 5.

An aerial view of the Exisal hangar from the fifth chapter.

Upscaled versions of images from the first chapter of Super Danganronpa 2, which show a close-up of Byakuya Togami's corpse. Likely used as placeholders.

Two sprites exist for collecting Monomi in the TREASURE HUNTER! Monolith minigame. Based on the other sprites in the minigame, it would have flashed between the colors. However since Monomi isn't actually in it, they go unused. 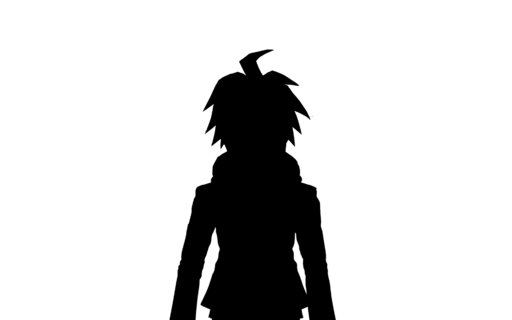 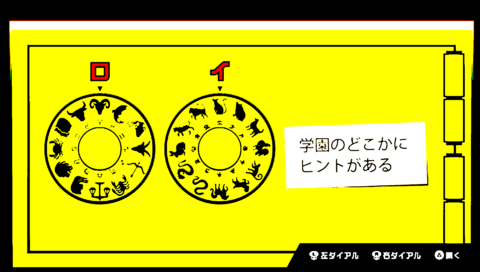 In the game's files is what appears to be an early version of Rantaro's puzzle from chapter 6, notably without the Monokuma-themed Zodiac symbols, likely a placeholder.

A placeholder version of Monokuma's thought bubble from the Salmon Fishing minigame.

Located in minigame\slot_machine\slot_machine_US.spc\symbol.srd is a bunch of early versions of the sprites seen in the MonoMono Slots machine in the Casino which have been scaled up poorly. 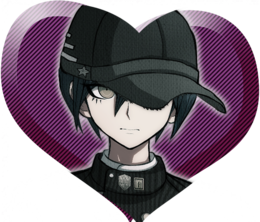 An incomplete icon that would have been used for replaying Shuichi's Hotel Kumasutra event from the extra menu if he had one. 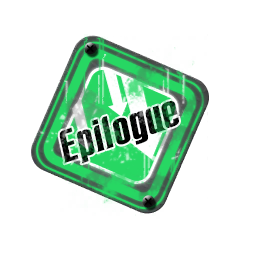 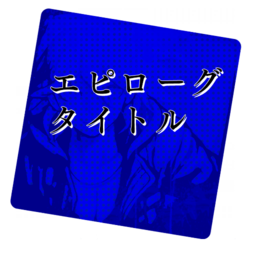 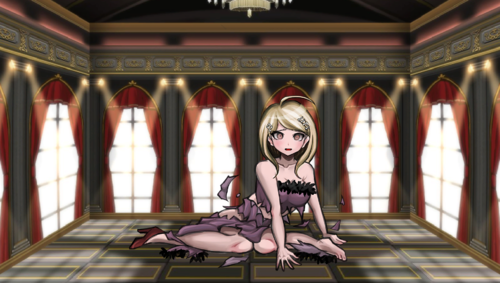 An alternate illustration of Kaede Akamatsu's defeated pose at the end of her Argument Armament in Chapter 1. The artbook shows this along with an alternate design for her first phase.

Both Himiko and Ryoma have several unused sprites for the "Talent Development Plan" minigame which appear to be modified versions of existing sprites, featuring a slightly different color palette, simpler shading, and redrawn facial expressions. It's possible they are early versions of the sprites used in the final game, which would explain why they go unused. The school uniform sprites of the characters in the prologue are shaded in the same way, suggesting they were based on these earlier sprites.

Makoto and Hajime's nametag textures have been leftover from the demo.

Early versions of the Argument Arament exist alongside the other music in the game. While not used in-game, they ended up being included in the game's mini soundtrack.

Shuichi has unused voice clips for calling out to Miu, Ryoma and Gonta during Debate Scrums, however, since they aren't ever on the blue side when you play as Shuichi, he doesn't call out their names.

A handful of characters have unused voice clips which are alternate takes of voice clips that can be heard in-game.

The casino minigame "Outlaw Run" is actually called "Towa Run" in the game's files, and the sprites for Monokid and Monodam are named "Kurokuma" and "Shirokuma" respectively. The game is still heavily inspired by Danganronpa Another Episode.

This version was released on October 4, 2017, with the following changes:

This version was released on October 11, 2017, with the following changes: