Deathmatch Classic is Quake deathmatch with a dash of Half-Life thrown in.

HUD images for the Pentagram of Protection, Invisibility and Quad Damage powerups are in the game's files, but are never used in-game. 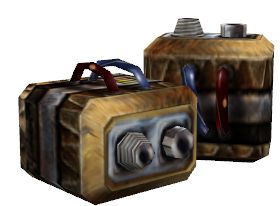 An unused model for a large battery for the Lightning Gun, which holds 12 cells as opposed to normal battery's 6. Large batteries in-game use the same model as regular batteries.

A model for a spent shotgun shell is in the game's files, but the game never uses it when a shotgun is firing.

All of Half-Life's sprites are in the game's files, and most of them are unused.

The Biosuit from Quake can be found in the level editor and placed in custom levels, but is never used in any of the official levels. It uses the Half-Life HEV Suit model, but has its own unique sounds.

A strange-sounding monster yell named "sight1" exists in the game's files. There are no monsters in DMC.

Some unused text can be found in the "titles.txt" file.

It looks like there was supposed to be a team-based mode in DMC at one time.

This message appears in Quake if you find a secret area. There are no marked secret areas in DMC, so this never appears.

The menu and console were changed to be like the Steam version of Half-Life when it was ported to Steam. For the main menu, the main graphic was changed to an image of a guy in an HEV Suit holding a double barrel shotgun with a sci-fi like background behind him and the removal of the Quake-like font used for menu options. In addition, the console window was given an update, much like the other GoldSrc WON-to-Steam revisions.