Upgraded with improved graphics and slapped onto a CD, this port of Half-Life also included an extra co-op campaign called Decay in which two female scientists fight to stabilize the situation in Black Mesa during the Resonance Cascade. A fan-made port to the PC version of Half-Life emerged from Ukraine in 2008. 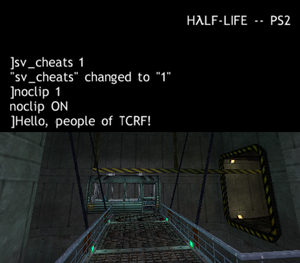 A debug console can be activated after applying one of the codes below, and pressing ~ with an attached USB keyboard. The same European code applies to all five of the known regional releases.

Since the Half-Life voice cast had to be brought back in to record new lines for Decay, the developers decided to have a bit of fun. According to Randy Pitchford, a special map was made for these, but it doesn't seem to be in the released game data.

Interestingly, these aren't just voice samples - there is a modified scientist model (outtakes_scientist.mdl) that contains a couple of additional animations relating to the name tag and Headcrab lines, and Dr. Keller has a lengthy "surprise" animation to go along with his little Dr. Strangelove tribute.

"Gordon, I'm very concerned about these electrical force field barriers. What will happen if we have a power outage?"

This unused line is a nod to USS Darkstar, a high-quality Half-Life mod by Neil Manke that had less-than-high-quality voice acting. According to Randy Pitchford, the Gearbox team thought it'd be funny to re-record some of the lines with the official Scientist actor.