Fallout 4 takes the series to Massachusetts, where a Pre-War civilian awakens after being cryogenically frozen in a vault for 200 years. There, the veteran goes on an epic journey to find some adhesive, romance eight people at once, and spend hours modding weapons and building towns. There was also something about a missing son, too...

The Enemy of My Enemy 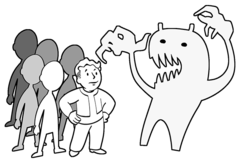 The mission would have taken place between the quests Reunions and Dangerous Minds. While not actually cut (the quest itself still occurs), it doesn't appear in your active quests, as the quest itself has no stages to appear in the player's PipBoy. 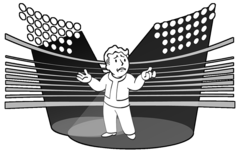 The mission would have taken place before The Nuclear Option. Several script remnants still exist for this quest, and indicate the following: 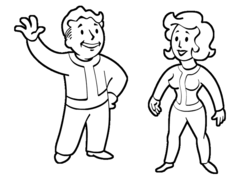 This mission would have been unlocked, along with A House Divided, if the quest The Battle of Bunker Hill was completed. The icon implies that the Sole Survivor's dead spouse would have been cloned and turned into a Synth.

20 Leagues Under the Sea 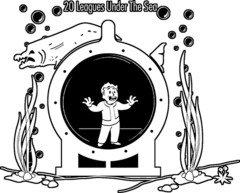 20 Leagues Under The Sea would have involved the Sole Survivor going to Vault 120 which was underwater. Vault 120 would have been inhabited by a massive sentient octopus outside the vault and mutated sea creatures. The Sole Survivor would fought said creatures off presumably with a harpoon gun (discussed in further detail below).

Additionally, several cut quest scripts, namely DN158QuestScript, point to originally using the Yangtze itself to locate an underwater vault, in this case, Vault 120. However, what that Vault would have contained outside these mutated creatures is anyone's guess, as several of the files appear to overlap with the Institute Bioscience area (referred to internally as Hydroponics).

Internally called InstR01 OLD, which shares its internal name with Pest Control (albeit with the OLD part removed).

All that remains of this radiant quest is its entry and stages:

Judging from the name and stages, Salvage would have involved checking up on synths and obtaining status reports from them, much like the mission Political Learnings.

Nothing exists of these sidequests other than their names and IDs.

Inside the files for Paladin Danse's dialogue are remains of a cut subquest where, after the subquest "Blind Betrayal", him and the player fight and kill Maxson, after which the player becomes the Elder of the Brotherhood.

Within the files of the game are two mod-related models for the Broadsider; a scope add-on and a bomb projectile. The mods cannot be spawned in-game or attached to the Broadsider. 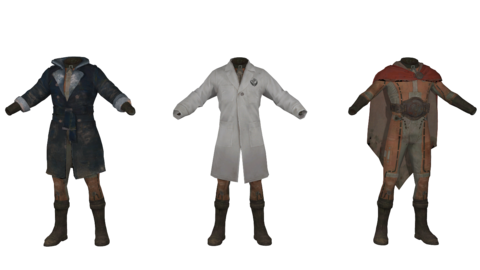 There are three unused variations of the BOS Uniform; from left to right, they are Kells' coat, the BOS Lab Coat, and Maxson's cape. Kells and Maxson wear different-looking apparel in the final game, and the BOS Lab Coat was most likely replaced with the Science Scribe's Armor.

A roughly-textured model of a weapon with parts from a Syringer and an assault rifle. Its internal name would place it with the unused "20 Leagues Under the Sea" quest.

A harpoon gun was eventually added in the DLC Far Harbor, but with an entirely different model. 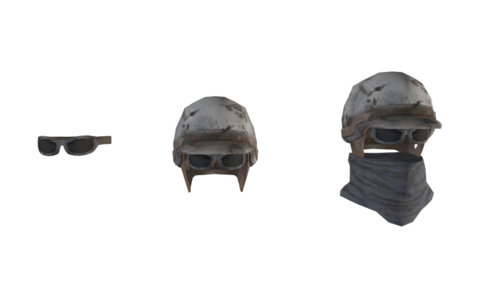 Three unused models exist of what appear to be early variations of the Metal helmet. The last model has an appearance similar to the Motorcycle helmet from Fallout 3 and Fallout: New Vegas. It's possible that helmets, similar to armor pieces, would have had normal/sturdy/heavy tiers.

While the scarf model was discarded, the helmet and goggles would be split into the Metal helmet and the Wraparound goggles, respectively.

Even though only two issues of the hairstyle magazine La Coiffe appear in-game, there are covers for three more magazines in the game's files.

Use the console command player.additem (ID) 1 to add any of the following items/weapons/armor to your inventory.

A scrappable variant of the regular pristine deathclaw egg that's obtained in "The Devil's Due". It can be broken down for two Bone and one Acid, much like the cracked deathclaw egg.

A holotape that serves as a (fake) defragmenter for the terminals and Pip Boy.

A modified version of the RobCo defragmenter. It's designed to hack and destroy turrets, similar to the holotape acquired from the turret edition of Total Hack.

An unequippable melee/unarmed weapon. The name suggests it was meant for a flammable gas trap.

A gun that has no range and is listed as using 5.56mm rounds. It can be equipped, but all the weapon does is make the player stick out their fists without the ability to punch. The gun can be fired in third person, but lacks a firing noise and its world model is broken.

A strange weapon, the Mini Nuke attaches the titular ammo to the player's right hand. It deals a rather high damage output for an unarmed weapon.

Three different copies of the Broadsider, presumably used for the Minutemen artillery strikes. The first one deals less damage than the other two, both of which are exactly the same except for their ID number.

Yet another copy of the Broadsider, most likely used for the nuclear missiles fired by the Yangtze submarine. The only difference between it and the Mortar weapons are its damage and ammo type. Firing the weapon will cause a gigantic missile to shoot out of the barrel, before exploding in a way similar to a Mini Nuke.

It's the bandolier that Cait normally wears. It's mostly complete, aside from a lack of a world model.

An invisible piece of clothing that takes up the eyewear slot. It provides no Damage Resistance, but adds +1 to Perception. Given its overworld model (which is the Faded trench coat), the Robotic bits probably would have been something that Nick Valentine wore.

The final unused Vault jumpsuit, and the most interesting due to Vault 101 not appearing in Fallout 4.

These mods can be applied by dropping the weapon/armor piece into the world map, clicking the item, and typing amod XXXXXXXX into the console, with XXXXXXXX being the mod's respective ID. 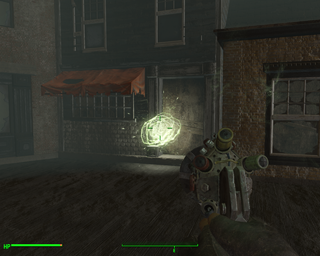 A muzzle mod for the Gamma gun that basically turns it into a shotgun. It works on both Lorenzo's Artifact and the Zeta gun.

There exists unused Brotherhood of Steel paint-jobs for the X-01 Power Armor. For some reason (probably the suit's connections to the Enclave), the mod was removed, making the T-series the only set of Power Armor to have the Brotherhood paint-job.

There are several perks in the game that cannot be obtained. These would have been granted by actions in-game, similar to companion perks:

Several perks are not unused, but have descriptions that would normally never be seen as they are NPC-exclusive:

There are also several effects related to perks that go unused in the finished game:

Several actors are named differently internally, either in regards to their main file or files related to them.