A decent fighting game on a portable system, though this game doesn't allow you to switch planes like in normal Fatal Fury games. 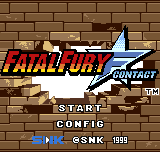 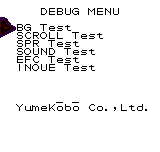 Change the byte at ROM offset 0x1C91 (CPU address 201C91) from 02 to 03 to add an invisible third option to the main menu. Selecting this leads to the game's debug menu.

From here, press Option to return to the main menu. 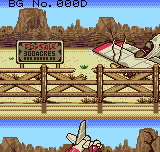 This screen lets you view the raw graphics for all of the game's menus, with separate monochrome and color versions of each one.

Use A/B to cycle through all of the available backgrounds, the thumbstick to move the background in any direction, and Option to return to the debug menu.

Note that certain backgrounds can cause the rest of the debug menu to become affected by graphical or palette corruption; to fix this, just exit back to the title screen and then re-enter the debug menu. 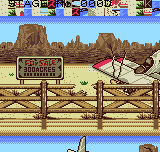 This screen is similar to the previous one, but shows each stage's background graphics as they actually appear within the stage (including a bit of garbage in parts of the background that aren't normally visible on-screen). The controls are basically the same as for the "BG Test" screen, but with only horizontal movement. 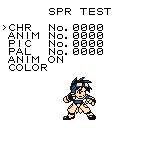 This screen lets you view all of the animations for each character, in either monochrome or color. Use the thumbstick to select a character, animation, and palette, then press A to start playing the selected animation, or select "PIC No." to be able to step through each animation one frame at a time. 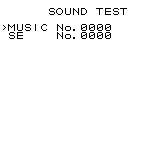 This one is pretty much exactly what it says on the tin. Use A to play the selected song/sound effect, or B to fade out. Any music you play here will continue playing after you exit back to the main debug menu. 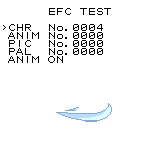 This one is similar to the "SPR Test" screen, but for testing sprite animations related to each character's moves, rather than the character sprites themselves. 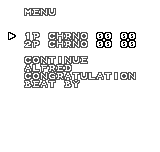 The last screen allows you to test the miscellaneous in-game screens using any selection of two characters. There's also an invisible fifth option at the bottom which just starts a 1P vs. CPU match using the selected characters. 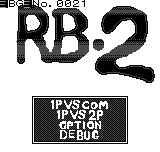 Selecting background number 0021 on the BG Test screen shows an early mockup of the title screen with hand-drawn-looking text. The "RB2" logo is in reference to Real Bout Fatal Fury 2, which First Contact is based on.

A "Debug" menu option is also visible, similar to the invisible (but still functional) third menu item on the final game's title screen.

(Note: This screenshot shows how the background appears on a monochrome system; it's not clear if it is actually shown with the correct palette on a color system.)