A bite-sized port of Fatal Fury 2 with rather sluggish gameplay, and one of the earlier entries among Takara's many Nettou releases. 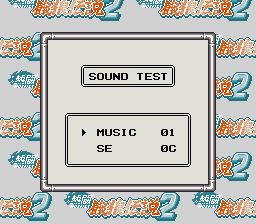 At the main menu, highlight either STORY MODE or VS MODE, hold Select, and press Start. 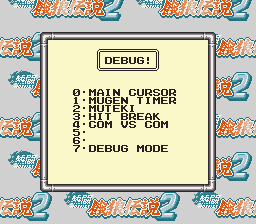 Use the Game Genie code 00D-83A-D5A, then hold any D-Pad button and press Reset to enter the Debug Mode screen. Highlight an option and press A to enable it or B to disable it. There's no indicator for what is turned on, other than the sounds of the buttons being pressed.

Note that if you enable the debug menu and then enter the boss code (press Select 3 times on the Takara screen), you can select one of the bosses as your first opponent, which you can't normally do.

Any enabled option activates the Soft Reset code (press Select + Start). It seems the 7th option were used for enabling or disabling the Debug Menu itself, but now its flag is not used anymore. However any of the unused options may be used to activate global debug functionality without touching the other working options.

Also, if any debug option is enabled, when fighting in "VS MODE" via Link Cable a lot of debug information will be displayed. Top row of numbers displays current players positions and statuses. Two small numbers to the bottom-left are for displaying players buttons pressed. The 4-digit number near it displays some timer while hitting the enemy.

Use the Game Genie code F5D‑3BA‑A2D then just reset the console to activate the 4th Mode selection menu option "BATTLE ROYAL". This is an unfinished game mode where you select up to 7 characters and fight them in sequence versus second player. The second player's controls seems non-functional. Also the characters selection screen have some graphical issues.

The Game Genie code 3F2‑B3D‑A2F replaces the Takara logo with an unused Rankings screen. The default scores table is always loaded at the game's boot but never shown otherwise.

As part of the Ranking system, there is an almost finished Name Entry screen that exists in the game's ROM. Use Game Genie code 452‑B3D‑A2F to replace the Takara logo with this screen. However, you need to score higher than 20000 during the game to see it. Or use the additional code 003‑ED8‑D5A to see it instantly. Also this mode does not work properly.

Note, that all characters displayed at this screen have Last names never shown otherwise during the game:

Starting at 0x76E33 in the ROM there are several unused words between other messages for screens used after the battles. Game has no any bonuses/lives or does not count perfect matches. For "TIME OVER" screen another message is used instead.