An expansion of Fatal Fury 2 in the spirit of Super Street Fighter II. Rather than introduce new characters, this one enables the four bosses as well as draw from the first Fatal Fury game with the additions of Duck King, Tung Fu Rue, and another boss, Geese, marking the first playable appearances of all three. There is even a hidden fight with some guy from another SNK fighting game... 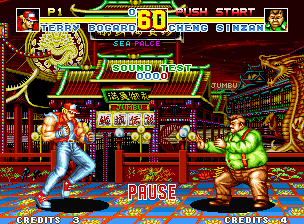 In console mode, pause the game and press A, B, C, D, A for the game's sound test.

A couple of unused animations can be seen by hacking the game's ROMs.

Apply the following patch to 058-p1.bin to see an alternate background for Terry's stage, which features the four boss characters from Fatal Fury 2 (Billy, Axel, Laurence and Krauser). This will also make Mr. Big from the Art of Fighting series appear, performing his cross diving move.