Hannah and the Kreludor Caves

Hannah and the Kreludor Caves is the third in the trilogy of Hannah the Brave games. Unlike the previous games on Adobe Shockwave, this game runs on Adobe Flash and introduces new features such as key doors, rocket boots, and fall damage. Ironic how fall damage was introduced in the game which takes place on the moon.

Within the game's files, a screenshot of an early game over screen can be found. It lacks the shading seen in the final, and uses orange buttons and text rather than purple.

On the main menu, hidden text can be found out of bounds to the left and top of the play area. The top message uses the Serif font, color #990033, and reads "HANNAH AND THE MOON CAVES", which was likely an early title for the game.

The left message uses the Kimberly Alternate font, the color #FF0000, a fancy little drop shadow, and reads "PULLING DATA FROM DEV. DO NOT LET THIS VERSION GO LIVE". Oops. 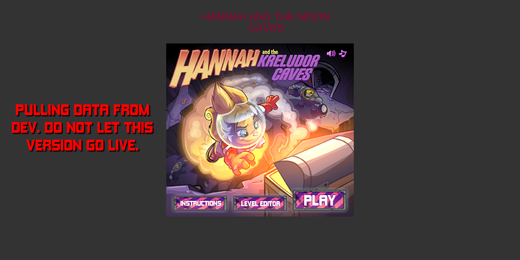