The very first Harvest Moon game was one of the last major releases for the SNES, and is consequently one of the most expensive games on the platform in the USA. It introduced young gamers to the concept of wasting time doing something in a video game that would be much more fulfilling and productive in real life. But hey, who wants to get all sweaty and dirty on an actual farm when you can make a cute little digital avatar do it for you? That's the joy of video games!

A girl's diary will read "……Th-thank you." when their affection reaches 1,000; however, the maximum affection a player can get for a girl is 999, rendering this message unused.

Aside from the different copyright information, in the Japanese version, the title is crafted out of hand-drawn planks of wood nailed together. For all other releases, this was replaced with a 3D-rendered sign. On the Japanese title screen, the green subtitle is a simplified version of the title, for younger audiences to read. The options in pink, while stylized in the Japanese release, are the same in both releases.

Many elements of the game were Westernized for its release in the US. As a result, the church contains a cross. However, the townsfolk will sometimes still discuss the church in Shinto terms and refer to multiple gods.

On the left screenshot, the Japanese says, "This is a special fruit wine that I made. Would you like to try some?" In the American version, all references to alcohol were changed to juice, though this was clearly only done to please the censors as the characters in the game still become intoxicated from it.

Art that accompanied the credits in the Japanese version was removed in international releases. 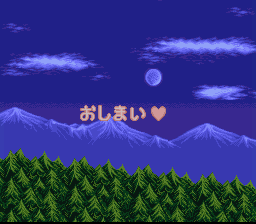 After the credits, the Japanese version displays the message おしまい (the end) which was removed in international releases. The graphics do however still remain in the ROM.