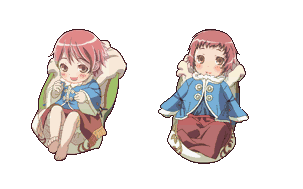 Ray is one of the eligible male marriage candidates while playing the "heroine" path, but an unused portrait indicates that the developers had other plans at one point...

It's possible that Ray was originally meant to be a woman at some point during development, as his name and his other used sprites could suit a female character. They might have scrapped these plans because there would be too many female marriage candidates, which is supported by an unused portrait of a bride Kyle in the first game.